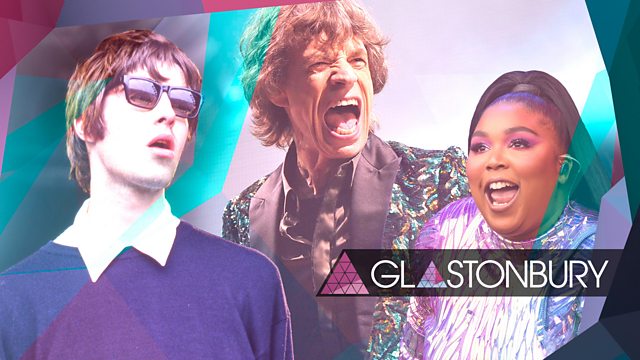 Jo Whiley and Mark Radcliffe celebrate the weekend that would have marked 50 years of Glastonbury Festival with rarely shown moments, including The Rolling Stones, Lizzo, Oasis and Stormzy.

Jo Whiley and Mark Radcliffe celebrate the weekend that would have marked 50 years of the Glastonbury Festival with an inviting blend of great performances from the archives and live acoustic sets from contemporary artists.

The festival, organised by Michael Eavis and his daughter Emily Eavis, takes place at Worthy Farm in Somerset. From humble beginnings in 1970, Glastonbury is now the largest greenfield music and performing arts festival in the world - with a site that is over a mile and a half in diameter. Each year, it hosts hundreds of thousands of festivalgoers, who flock to see performances from the most famous names in music and immerse themselves in the vast range of events that the festival has to offer.

This show brings viewers previously unseen or rarely shown moments, including highlights from The Rolling Stones headline set in 2013, PJ Harvey’s rocking 2004 performance shortly after the release of her sixth solo album Uh Huh Her, the irrepressible Lizzo in an early acoustic performance in the BBC garden area, Florence and the Machine’s debut on one of the main stages in 2010, Oasis setting the world on fire on the NME Stage in 1994, plus a reminder of Stormzy’s headline set last year.