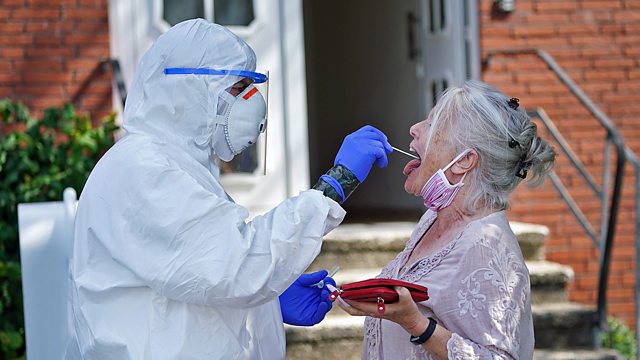 Stories from Nigeria, Ladakh, Chechnya, Crete and on how a coronavirus outbreak in a meat factory led to new lockdowns in Germany. With Kate Adie.

Germany had eased its lockdown, but after a spike in cases at a meat-packing factory the authorities have re-imposed lockdown restrictions in two districts, affecting over half a million people. Is this the start of a second wave or just something to be expected asks Damien McGuinness?
The Islamist militant group Boko Haram has operated in north-east Nigeria for years, despite the Nigerian army's efforts to defeat them. Recently there has been a new spate of attacks, in the garrison town of Monguno, and two more nearby. And now, they are targeting aid workers, as Colin Freeman reports.
There was a deadly clash in Ladakh’s Galway valley last week, where India borders China. Both sides accused each other of crossing into their respective territory. Against this turbulent backdrop, the region is also known for its snow leopards. Michelle Jana Chan went in search of them.
A Chechen blogger living in exile in a secret location in Sweden. says he was the victim of an assassination attempt, carried out with a hammer. The blogger had been a vocal critic of the pro-Russian government in Chechnya. So who sent the would-be assassin, and why did the hitman, who had not killed previously, take on the job? Nick Sturdee investigates.
In Greece concerts are allowed again, and those who like folk music, but not the ubiquitous bouzouki sound, may want to head to Crete. Here the traditional performances don’t include bouzoukis, but instead, as Heidi Fuller Love has been finding, the instruments and voices are enhanced by live gun shots.
Presenter: Kate Adie
Producer: Arlene Gregorius

Indigenous Australians and the police