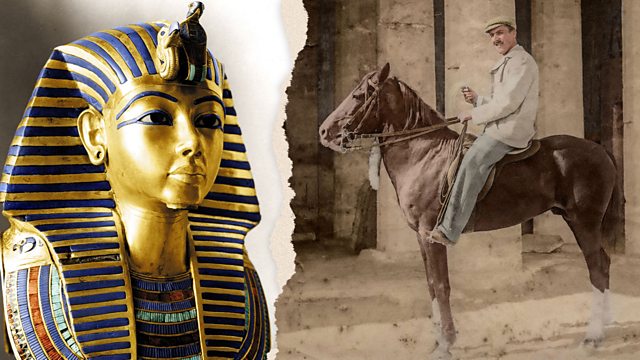 Egyptologist Elizabeth Frood takes us back a century to experience the discovery of Tutankhamun's tomb exactly as it happened, all thanks to the colourisation of the original photos and film.

A century after the world’s most exciting archaeological find - the tomb of Tutankhamun - we can witness the dramatic scenes of its discovery and marvel at its extraordinary treasures exactly as they were first seen - in colour.

Oxford University Egyptologist, Elizabeth Frood, is our guide to the discovery of the tomb on 4 November 1922 by British Egyptologist Howard Carter and Lord Carnarvon. It provided much-needed good news, following the Great War and the Spanish Flu pandemic of 1919, and we have been transfixed ever since.

Colourisation provides a fantastic insight into the artefacts themselves and the context that they were found in. Many photos were taken using glass plate negatives, which have fantastic resolution and which, with colourisation, reveal detail not seen for a century.

Liz’s story begins in 1891, with an old black and white family photo of the young Carter. Colourisation brings him to life as he arrived in Egypt as a 17-year-old artist. Carter met two people who would change his life: British Egyptologist Flinders Petrie, who inspired him to be an archaeologist, and Lord Carnarvon, a keen amateur Egyptologist who hired Carter to help him.

Liz travels to Highclere Castle to meet the current Countess of Carnarvon. Carnarvon and Carter both yearned to find what nobody had ever discovered before, a pharaoh’s tomb with its treasures still intact. Carter became convinced that Tutankhamun’s tomb lay undiscovered in an ancient royal burial ground known as The Valley of the Kings, and in 1914 Carnarvon was granted a concession to start excavating there.

But the First World War intervened. Colourisation reveals a changing Egypt. Egyptians were soon pushing for independence from Britain, which claimed Egypt as a protectorate. The politics of the time were to have a profound effect on Carter and Carnarvon.

In December 1917, the meticulous Carter divided the valley up into a grid and began excavating each sector, right down to the bedrock. Colourisation reveals the astonishing scale of the operation that was required.

On 4 November 1922, a water-boy in Carter’s team, Hussein Abdul Rasoul, discovered a flight of steps descending into the bedrock. Carter broke into the tomb to discover first a rubble-filled passageway, then another sealed entrance. As Carter peered in, he declared, ‘It is wonderful.’ The extraordinary collection of objects he saw, including gilded couches, chariots, jewels, statues, and even ancient lunchboxes containing food for the afterlife, were captured in black and white by expert photographer Harry Burton. Using colourisation, we are now able to experience the scene that met their eyes, in incredible detail, almost as though it’s right in front of us.

On 16 February 1923, Carter and Carnarvon broke through into Tutankhamun’s burial chamber. A large blue and gilt shrine filled the room. Opening its doors, Carter discovered sealed doors to another three shrines, one within the next. Within these was a sarcophagus made from yellow quartzite and, within this, a nest of three coffins, also one within the next. For the first time in a century, we reveal each stage in amazing coloured detail. The outermost coffin was gilt, adorned with a garland of flowers. The middle one was inlaid with gold and coloured glass and the innermost was - incredibly - crafted from solid gold.

Finally, within this, was Tutankhamun’s mummy wearing the famous solid gold mask. Colourisation of the rather messy-looking black and white photograph reveals that his wrapped body was actually festooned with colourful jewellery.
The discovery of Tutankhamun’s body also revealed that he died very young, aged 19. This changed the way Tutankhamun was seen around the world. In Europe, the death of a young man hit a chord with so many who had lost their sons in the First World War. In his own country, Tutankhamun became a young and vibrant symbol of a powerful and independent Egypt.

See all clips from Tutankhamun in Colour (7)