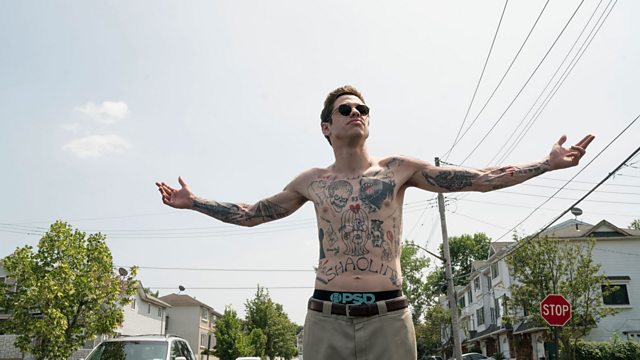 Judd Apatow on The King of Staten Island, the coronavirus hits jobs on West End musicals, and the Carnegie and Greenaway winners announced.

Judd Apatow - famous for film comedies like Knocked Up, The 40 Year Old Virgin, and Trainwreck - on his new film The King Of Staten Island, which he co-wrote with Saturday Night Live star Pete Davidson. Pete plays a young man trying to get his life together after the death of his fire-fighter father.

Today the damage to UK theatre caused by the Coronavirus has really begun to show: major producer Cameron Mackintosh has announced redundancy consultations for staff on blockbuster shows, including Hamilton and Phantom Of The Opera. Additionally, a hundred leading creative figures have signed a letter calling for government action to save the sector. We talk to Matthew Hemley, News Editor of theatre magazine The Stage, about the crisis faced by UK theatre.

We announce the 2020 winners of the CILIP Carnegie Medal for writing for children and the CILIP Kate Greenaway Medal for illustration for children, and speak to the winners about their work.

Plus Alison Brackenbury, Front Row’s virtual poet-in-residence for the week. She's been inspired by the museums and galleries she visited before lockdown and is sharing a poem a day from her Museums Unlocked series. Today’s is about buried treasure and takes us to Birmingham Museums’ Staffordshire Hoard exhibition, and back to the age of the Anglo-Saxons.

The King of Staten Island, written and directed by Judd Apotow is available to stream now, certificate 15.

Main image above: Pete Davidson as Scott in The King of Staten Island

Image to the left: Judd Apatow (Centre) and Pete Davidson (Left) on the King of Staten island set.

The Carnegie and Kate Greenaway Medals

The winners of the CILIP Carnegie and Kate Greenaway Medals 2020 are announced this evening.

The shortlisted books are:

The Black Flamingo by Dean Atta, illustrated by Anshika Khullar
Nowhere on Earth by Nick Lake
Lark by Anthony McGowan
Patron Saints of Nothing by Randy Ribay
Lampie written and illustrated by Annet Schaap and translated by Laura Watkinson
Voyages in the Underworld of Orpheus Black by Marcus Sedgwick and Julian Sedgwick, illustrated by Alexis Deacon
On the Come Up by Angie Thomas
Girl. Boy. Sea. by Chris Vick

Alison Brackenbury introduces the third of her Museum Unlocked Poems

I’m at home in lockdown, just a few miles from the M5 to Birmingham. For decades, at work, I dealt with its skilled engineers.

Now I’m retired, I find myself drawn more and more to this city It has many songs and languages. It’s alive with poetry- and many of its poets are very young. When I asked them what I should visit, almost everyone told me that I must go to the Birmingham Museum and Art Gallery.

So I went – and marvelled at the strange, broken loveliness of the Staffordshire Hoard.

This hoard has over three thousand objects, including pieces of weapons and harness. Many are beautifully made. It’s thought they were hidden in the seventh century. This was a troubled time, a time of change from the Anglo Saxon pagan gods to Christianity.  No one knows who buried these treasures, or why. So I began to guess, in a short poem which tries to speak with the voice of their desperate owner.

I heave in crosses first,

round as her breast.

heaped ransom for their King.

I smell them, rain on wind.

Stiffly I climb the track.

I keep the useful sack.

Image: A golden pyramid fitting, part of the Staffordshire Hoard.