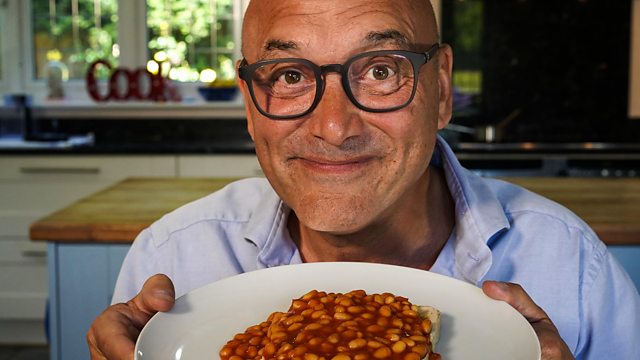 In episode two, Gregg reconnects with the Heinz baked beans factory in Wigan which he visited back in 2016. The coronavirus crisis caused a massive spike in the sales of tinned goods, and the baked beans factory upped production to deliver almost 50 million cans in just one month, nearly double the amount of tins they would normally sell in the same period.

Throughout the episode, Gregg looks back over the whole production process. First, he helped unload 27 tonnes of dried haricot beans from North America and followed them on a one-and-a-half mile journey through the largest food processing factory in the world. He discovered how a laser scrutinized every single bean; how the spice recipe for the sauce was a classified secret; and most surprisingly, how the beans were cooked inside the can in a room of giant pressure cookers, so not baked at all! Meanwhile Cherry Healey followed the journey of a discarded can through a recycling centre and on to the largest steelworks in the UK. She also explored how tinning keeps our food fresh, taking a tin of tomatoes 14 months past its ‘best before’ date and revealing it still had the same Vitamin C levels as fresh tomatoes. And historian Ruth Goodman revealed how Henry Heinz first marketed baked beans in the UK in the early 1900s.

Today, Gregg is self-isolating with his family; and only essential people are allowed on the factory floor, so Gregg catches up with some of the workers via video calls to find out how they're coping in these extraordinary circumstances. A two-person crew observing strict social distancing are with Gregg at home, while the factory workers film their own footage on site using sterilised equipment. Gregg speaks to operations manager John Brockley, who he had first met when he filmed the tinned soup episode. John reassures Gregg that the beans are still getting through from North America; in fact they have increased the import - usually they have two ships at sea, containing 800 tonnes each, taking sixteen days to travel coast-to-coast; now they have upped it to three ships coming across the Atlantic.

Since Gregg can’t go to the factory himself, John agrees to be his 'roving reporter', to reveal how the staff are keeping safe across the site, including passing through a thermal camera which automatically takes the temperature of workers as they enter the factory.

Later John shows the ways they have managed to increase production. A new, faster canning machine had been installed since Gregg’s last visit, producing a whopping 1,200 cans a minute compared to the previous 800. The factory has also temporarily simplified the line, producing less variety of products and focussing on making more of the in-demand items. They have also increased shifts, and only stop the line for one 24-hour period at the weekend instead of 48 hours to do essential maintenance.

In the spice mixing area, Gregg meets to the new holder of the secret spice recipe, David Whitely. Gregg still isn’t able to glean any secrets, but David reassures him there are no problems with the supply of ingredients for the sauce, so it’s beans business as usual.

Gregg also speaks to manager Anthony Foster at their nearby national distribution centre, a giant warehouse which holds almost all of Heinz’ products, before cranes load them on to trucks to be sent out to supermarkets. On his visit in 2016, Gregg was amazed not only at the incredible, automated ‘dancing cranes’ but also at how warm it was inside the warehouse caused by the heat coming from the products fresh from the cooking in the factory. Anthony reveals the pressures of recent demand; during the peak of panic buying they distributed an incredible 2.7 million cases in a week, compared to a normal distribution of 1.9 million per week. They’re running a 24-7 operation, and are sending out whole pallets of ins to larger customers rather than breaking them down to smaller orders, which means they can move product out of the warehouse more quickly.

Finally, having looked back over the factory’s entire production process and learnt about its many efforts to boost output and keep its staff safe, it’s time for Gregg to say goodbye to roving reporter John and to sign off with a big thanks to the factory workers on behalf of us all. It’s ‘bean’ great.