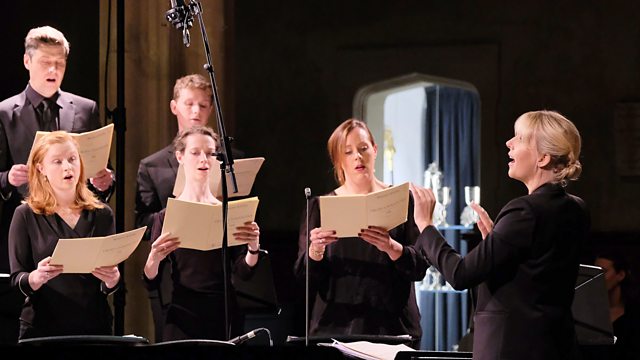 Recorded in May 2018 when Sofi Jeannin was chief conductor designate of the BBC Singers, music by Handel from Milton Court in the Barbican Centre.

Three of Handel's Coronation Anthems and his Dixit Dominus give the BBC Singers and St James' Baroque the chance to shine in much-loved music.

Handel, newly naturalised a British citizen by George I, was asked to write the coronation anthems for his successor, George II and his queen, Caroline. He gave us four magnificent choral works, three of which we hear in this concert, and one of which, Zadok the Priest, has been heard at every British coronation since 1727. Stephen Farr joins St James' Baroque for Handel's delightful 'The Cuckoo and the Nightingale' organ concerto before the concert closes with Handel's thrilling Dixit Dominus, a work from his early years in Italy. Sofi Jeannin returns to London and the BBC Singers for this stirring celebration of Handel.

Presented by Sarah Walker in May 2018 from Milton Court in London's Barbican Centre.

See all recipes from Music for Royal Occasions: Choral Music by Handel