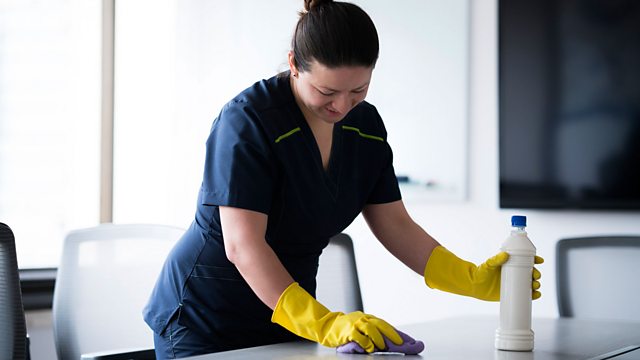 The UK cleaning sector is worth almost £50bn a year to the country’s economy. It employs more than 900,000 people, mostly women. Right now, many are vulnerable. Some feel they won't be able to stop working if they fall ill or have to self- isolate because they can't afford it. Jenni speaks to Katy, a cleaner. Also Maria Gonzalez who's an employment barrister and Janet Macleod who's a Unite representative

Cassa Pancho set up Ballet Black twenty years ago. It's a professional ballet company for Black and Asian dancers, and from the start its aim was to make the dance world more diverse. As well as Cassa, we also talk to Cira Robinson who performed with Stormzy at last year's Glastonbury. Tonight Ballet Black is part of a new BBC TV series called Danceworks.

Jackie Kay, the National Poet for Scotland, also known as Makar, discusses her new online poetry and music festival. It's called Makar to Makar and streams via the National Theatre of Scotland's YouTube channel. We also hear from Gerda Stevenson who's a writer, actor, director and singer and is on Jackie's show, plus the singer Claire Brown, who performs a beautiful, traditional Scottish song live.