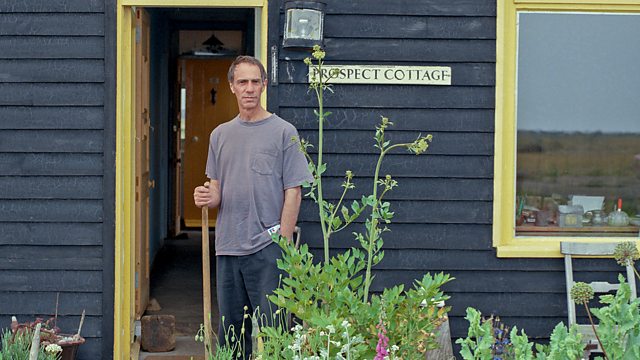 With music from Stravinsky and the Pet Shop Boys, and readings from Derek Jarman's journals, Olivia Laing and TS Eliot, conjuring up the spirit of Prospect Cottage in Dungeness.

Tilda Swinton and Samuel Barnett are the readers in an episode inspired by the saving of the beachside home of film-maker, painter and writer Derek Jarman following a crowd-funding campaign. Jarman (1942-1994) purchased Prospect Cottage on the shingle shore at Dungeness in 1986 following his diagnosis as being HIV positive and it formed the backdrop for his 1990 film The Garden. This was one of 11 feature films he directed including Caravaggio, The Tempest, The Last of England and Blue - which Radio 3 collaborated on with Channel 4 when that premiered in 1993.

Today's Words and Music brings you music referenced in Jarman's writing and films, from Stravinsky's the Rite of Spring to pop songs by the Pet Shop Boys and Annie Lennox which Jarman directed the videos for. Tilda Swinton reads words from Jarman's books Modern Nature, Chroma, and At Your Own Risk, a moving history of homosexuality in the UK, and Samuel Barnett reads poetry including John Donne's The Sun Rising which is inscribed on the wall of Prospect Cottage.

You can read a news story about the saving of Prospect Cottage and see images of it here https://www.bbc.co.uk/news/uk-england-kent-52120409