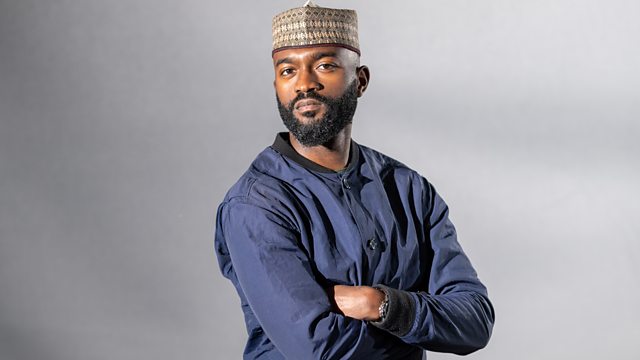 The National Theatre is streaming, free, its hit production of Barber Shop Chronicles. Tom Sutcliffe talks to author Inua Ellams about his career and his life as an immigrant.

This evening's Front Row is packed: Tom Sutcliffe talks to a poet, a novelist, a graphic artist, a cultural entrepreneur and a dramatist - but he has only one guest. Inua Ellams is all of these. This week the National Theatre is streaming in its At Home series Ellams' play Barber Shop Chronicles. It sold out at the National twice and toured the UK and internationally to rave reviews. It is set in a barber's in Peckham, and in Accra, Lagos, Kampala and Johannesburg. Ellams explains that men gather in barber's shops not just for haircuts but to talk and argue, about being men, about fatherhood, about women and politics.

He tells Tom about how he came to this country, aged 12, when his family had to flee Nigeria because his father, a Muslim, was married to his mother, a Christian. An early work was An Evening with an Immigrant, which he toured all over the country, to places where some of the audience was initially suspicious and some, sharing his experience, saw their own experience onstage.

Ellams also invented The Midnight Run, taking people on a waking tour through London overnight, with artists and and musicians, exploring the city, he says, 'with the wonder of children in a maze'.

He talks too about basketball and Greek and African gods and his collaboration with Anton Chekhov, whose Three Sisters he set in Nigeria in the Biafran War, about home, black masculinity and the way he creates

Barber Shop Chronicles by Inua Ellams is available to stream on National Theatre at home until 21 May 2020.

Image to the left: Cyril Nri as Emmanuel (Right) and Abdul Salis as Kwame in Barbers Shop Chronicles