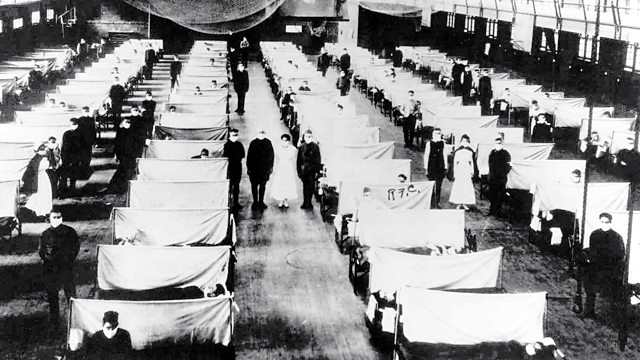 In Episode 1, he looks at the much debated origins of the H1N1 strain of flu. There are three theories - firstly it incubated in an army camp in the United States, secondly it originated from China, and thirdly (John's theory) that it probably began a couple of years earlier inside a military camp near the Western front in France. The real truth about the origin remains a conundrum to frustrated scientists.

John also looks at the symptoms, some of them remarkably similar to the ones we see today with coronavirus. Both diseases affect the respiratory system and lead to coughs and fevers but there are specifics which make them both unique. The H1N1 strain of the flu would turn people a strange purple colour, give them severe headaches and, in many cases, delirium. In 1918, a secondary disease like bacterial pneumonia could not be treated with antibiotics.

This particular strain of the flu tended to affect younger, fitter people. Around half of all those who died were in their 20s to 40s. Pregnant women died and so did their children. It's thought many elderly people had built up immunity from previous serious outbreaks of flu in the 1800s.

Through powerful testimony we hear how the spread of the disease was stark and affected the whole world in extremely quick time. Ships and trains became the incubators and it's believed the flu was first brought into Britain by soldiers returning to Scotland. It wasn't unusual for a soldier who had survived four years of bloody conflict to return from the front on a Monday and be dead by Thursday. Whole families were wiped out by the Spanish flu.

In every part of the world, the fear of death was palpable. Professor Howard Phillips, Professor of History (Capetown University, South Africa), tells the programme, 'It all happened at dramatic speed. One man wrote, "I wonder if humanity will survive". In that situation, hearing a sneeze would have been spine-chilling.'

And in a frightening reminder of how pandemics evolve, John explains how the killer flu came in three waves - firstly in the spring of 1918, then in the autumn of the same year and again in early 1919. Armistice celebrations at the end of the First World War helped to make the second wave even more deadly than the first.

Episode 2 will looks at how the authorities in the UK and around the world reacted to the flu in different ways and how misinformation played its part. Episode 3 examines the long term impact on people, communities and on general health.