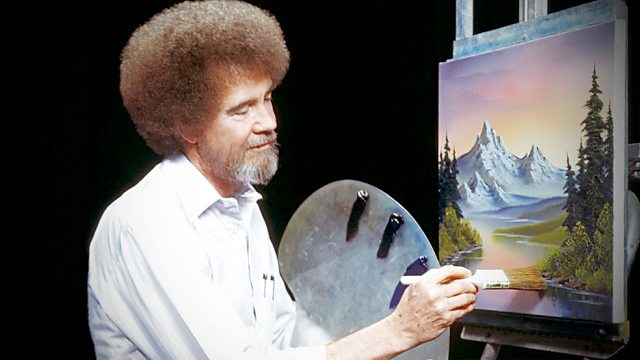 Examining the current anxiety epidemic among young people through the unlikely prism of a comforting YouTube archive - Bob Ross’s instructional TV show, The Joy of Painting.

"You absolutely have to have dark in order to have light." This sentiment from television art instructor Bob Ross is perhaps more resonant than ever at the present time.

Former army sergeant Bob Ross shot to fame in the 1980s and 90s with an instructional TV show called The Joy of Painting. It ran on the American Public Broadcast network until 1994, a year before Bob’s death. Twenty years later, his shows have found a new audience via YouTube, particularly among young people. His gentle manner presenting his real-time paint-along technique, peppered with advice about life itself, provides an alternative form of therapy - reducing anxiety, relieving stress and aiding sleep .

Presented by 25 year old Jack Taylor, himself no stranger to anxiety, and recorded before and during the lockdown, Happy Little Trees invites listeners into landscapes that, as Bob himself says, 'exist only in mind' before finding expression on canvas.

With thanks to Bob Ross Inc.