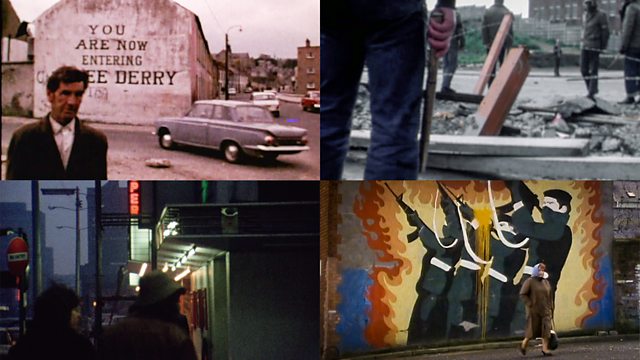 As part of BBC's Novels That Shaped Our World, BBC Northern Ireland Rewind team have created a series of films which The Culture Cafe is marking with a Great Ulster Novel debate.

As part of BBC's Novels That Shaped Our World, BBC Northern Ireland Rewind team have created a series of films which The Culture Cafe is marking with a Great Ulster Novel debate. Plus, this week's The Wonder Gallery challenge is set by children's author and illustrator Nick Sharratt and our Lockdown Masterclass is on how to draw your own cartoon with Andrea Montgomery.

See all episodes from The Culture Cafe

Love Across the Divide

Four stories about love and danger in Northern Ireland. Part of the BBC's Novels That Shaped Our World. Click the related link for the full story.

Mairtín Crawford (1967-2004), was a trail-blazing Belfast-born writer, journalist and live literature organiser, whose tragic early death left the Belfast literary community reeling, and a legacy that continues to inspire. Editor of radical poetry journal The Big Spoon, production and arts editor of Fortnight Magazine, and a restless impresario who brought Allen Ginsberg to Belfast in 1993, throughout his short life Mairtín fiercely served his vision of an inclusive cultural revolution in Northern Ireland. This year, as it has since 2017, the Crescent Arts Centre celebrates the life and work of a man Michael Longley called ‘a saint of poetry’, with the Mairtín Crawford Awards for Poetry and Short Story 2020.

In honour of Crawford’s work for the Crescent Arts Centre as a writer-in-residence and tutor, the Prize supports emerging writers, working toward their first full collection. As a close friend of Mairtín, who welcomed me many times to Belfast, I am honoured to co-judge the poetry award this year. As the editor of his posthumous Selected Poems (Lagan Press, 2005), I am also grateful for the chance to shine a light on Mairtín’s own extraordinary poetry: work that has stood the test of time because it was always light years ahead of its time.

As Marie-Louise Muir and I discussed on The Culture Café, it is amusing to think of Mairtín as a ‘saint’. He was a sensitive, sometimes volatile man, a heavy drinker and smoker, famous for falling out with people - and then making up with extravagant gestures or tempting invitations. Yet Longley’s description is profoundly true, and not just in regard to Mairtín’s tireless work on behalf of other writers.

Of Saint Genet, the title of his biography of the transgressive writer and ex-prisoner Jean Genet, Jean-Paul Sartre said, ‘genius is not a gift but a way out that one invents in desperate circumstances’. As a poet, Mairtín’s genius lay in his insistent yet humane and heartfelt response to the Troubles. Refusing the call to ‘whatever you say, say nothing’, he took up the torch of another controversial Northern Irish writer, Padraic Fiacc (1925-2019), disdained as ‘crude’ and didactic in some quarters for his unflinching witness to decades of political violence. As Brian Patten argues though, such hostile critics deny Fiacc’s manifest ‘empathy for the frightened and maimed’, while Gerald Dawe emphasises Fiacc’s ‘anti-heroic’ stance: all qualities Mairtín’s work shares – and, arguably, with the lives of saints.

Directly, yet with immense skill, subtlety and compassion, Mairtín Crawford confronted in his verse the political violence that permeated his and others’ lives. Yet though he could not escape his own emotional loyalties, he never took sides. His poems about a drive-by shooting, a baseball bat assassination, a couple fighting in the aftermath of an explosion, are concerned with the victims of violence and sectarianism, regardless of political or religious identities. Apart from a satirical reference to the ‘C & W sermons’ of Bonfire preachers, and a kitchen sink riff on the Good Friday Agreement that ends ‘Vote . . . Yes’, the only political group named in the book is the United Society of Irishmen: an eighteenth-century Republican movement founded by Ulster Protestants, many of whom were martyred to the cause. Though the anger of the colonised Catholic erupts in his scorching tribute to Fiacc, ‘St Patrick’s Cross’, and is pricked by the vicious thistles of the mysterious ‘Going Places’, on the whole Mairtín’s poetry responds to political violence by diving into restless tides of despair and consolation, youthful exuberance and intellectual gravitas, memory and yearning. Compared to Fiacc’s, his, as Damian Smyth has noted, is ‘a surprisingly gentler voice’.

As Smyth has also observed, with their recurrent images of emotional and mechanical breakdowns, Mairtín’s poems exude ‘a sense of exhaustion, misunderstanding and boredom’. As much as it is characterised, though, by a futile longing to escape, to climb like a swift above the ‘bombs, bombs, bombs’, Mairtín’s work also powerfully enacts that escape. Influenced as well by the Blakean Beats, his poetry mines a visionary vein – for rocket fuel. At times his writerly probe into the supernatural and paranormal intensifies the darkness of his realist themes: poems like ‘History’, with its haunted house, and ‘Anamnesis’ (meaning ‘recollection of a supposed past life’), in which a dropped tea cup portends carnage, painfully demonstrate how trauma ghosts time. Elsewhere, though the endeavour ignites in his work a daring energy of discovery and joy.

Why stop at the clouds, after all? Why not fly to the moon? In his final poems, a sequence borne out of his Arts Council trip to NASA, Mairtín Crawford takes an imaginative voyage through cold war discord into ‘Visions, poems, spaceships, miracles’. These poems reach for the stars and find in their alien terrain a tentative sense of healing. Whereas ‘Going Places’ bleakly insists that ‘the fields are blank until / we put our ignorant stare on them’, ‘Life on Mars’ cites as evidence the names we have given the red planet’s ‘oceans, hills and valleys’, the poetic litany summoning a renewed sense of faith in human beings and our oft-thwarted search for meaning.

The book’s last sequence also seeks the wisdom of the cosmos, demanding of Mir and Jupiter and the moon that they look back at us. The question of what they see suggests a holistic answer that, had he lived, Mairtín Crawford would surely still be urging as a response to global pandemic. Given what my co-judge Moyra Donaldson has called his ‘revolutionary spirit’, it is fitting that his Awards should be encouraging aspirant writers at this time of enormous social change. But his own poetic voice must be heard as well: through his wounded witness to violence and loss, and defiant belief in love and the human imagination, Mairtín Crawford, a rebellious ‘saint of poetry’, reminds us that it is not just from space that we are one planet and one people.

The deadline for submissions to the Mairtín Crawford Awards is midnight on Weds May 13 2020. For more information about the Awards.