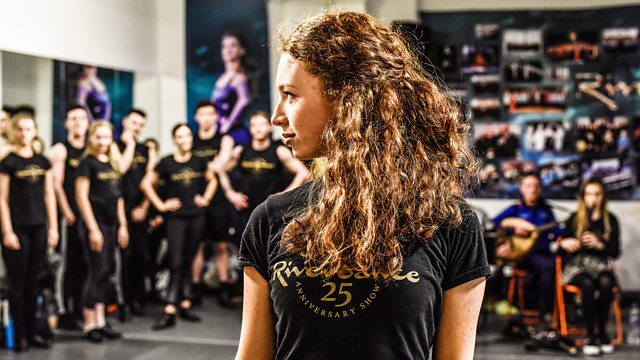 Amy-Mae Dolan lives and breathes Irish dancing, but has she got what it takes to be the female lead in a special 25th anniversary performance of hit show Riverdance?

As hit show Riverdance prepares to celebrate its 25th anniversary with a special gala performance at Dublin’s 3Arena, its cast of Irish dancers from all over the world are locked in intense rehearsals. Billed as one of the biggest nights in Irish dance in living memory, audience expectations have never been higher, and nothing can be left to chance.

For the dancers, many of whom weren’t even born when Riverdance was created, being part of this special night is a dream come true. And the two dancers who step into the male and female lead roles will be immortalised in Irish dancing history, sharing a moment that will change their lives forever.

Amy-Mae Dolan from County Tyrone is one of three female leads in contention for the coveted starring role on the gala night, which will be filmed for international cinema release. This documentary follows her intense physical and mental preparations both at her family home outside Castlederg and in Dublin, where the cast come together for two weeks of gruelling rehearsals before the show opens.

For each of the three female leads – Natasia Petracic from Australia, Meadhbh Kennedy from Ireland and Amy-Mae – being chosen to be the principal dancer on this special night would mean everything. The decision lies with Riverdance co-founder John McColgan – who will he choose to step into the spotlight and be part of the show’s legacy?

The documentary takes viewers into the rehearsal studio for a unique insight into the preparations for this world-class dance show, as dancers are pushed to their limits day after day by associate director Padraic Moyles, who, as a former lead dancer for 18 years, knows the choreography of the show better than anyone. And when the big night finally arrives, will Amy-Mae fulfil her ambition of being the female lead in a performance the world of Irish dance will never forget?