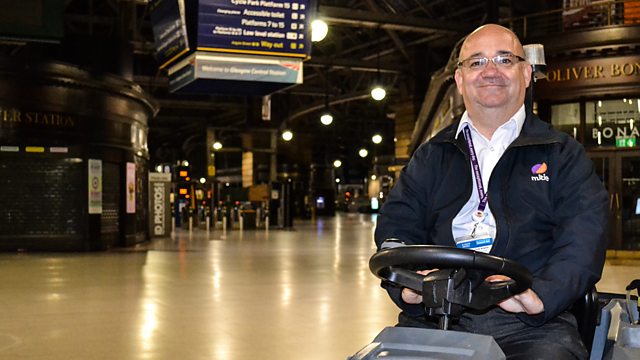 Inside Central Station Series 2
Episode 1 of 6

First in a six-part series following the staff and passengers of Glasgow Central station. This episode sees the team deal with chaos on the concourse caused by heavy rain.

Documentary series following the people that work all hours to keep Scotland's busiest train station on track, delving into the buildings history with stories of the past. Central station has been at the heart of Glasgow for more than140 years, running over 950 trains a day for 32 million passengers a year. Day and night for one long summer, this series follows the people who make the station work. Central station has long been Scotland's busiest - it is the Northern terminus of the West Coast Main Line from London and the starting point for travel to hundreds of stations in mainland Britain. Over the decades, the station has knitted itself into the lives of many people. For generations of Glasgow folk, particularly those that work here, Central station has become part of the family.

In this episode, heavy rainfall causes travel chaos for passengers attempting to travel south, and staff across the station pull together to help passengers reach their final destinations.

It is the first week on the job for new station tour guide Jackie, and she is trying to get to grips with the long history of Central station in time for a test run of her new tour. Meanwhile, the Blue Lagoon chip shop serves hundreds of station passengers every day, but it is a race against the clock to get the refurbished shop open in time for rush hour. Station manager Drew is on night shift as he watches over passengers heading off for a day at the races, and author Gordon Webster explains the legacy of the infamous Beeching Cuts as veterans of Central station discuss the impact of railway privatisation.