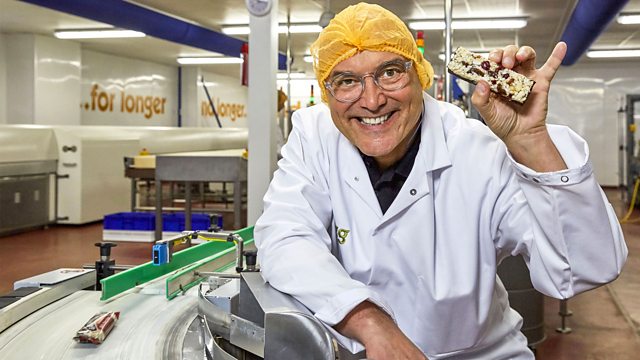 Gregg Wallace is in Essex at an enormous cereal bar factory, which produces 400,000 fruit- and nut-packed treats a day.

Gregg Wallace is in Essex at an enormous cereal bar factory, which produces 400,000 fruit- and nut-packed treats a day. Gregg follows production from the arrival of two tonnes of macadamia nuts all the way through to dispatch. Along the way, he gets hands on with all the ingredients, from nuts to cranberries and sultanas to puffed rice. He learns that it takes a carefully balanced blend of honey and glucose to bind the ingredients together. Too much honey and the bar would be too chewy. Too much glucose and it would set rock solid. A mix of both produces the ideal texture.

Meanwhile, Cherry Healey is helping out with the macadamia harvest in South Africa. The country is the world’s largest producer of these nuts, responsible for a quarter of the global harvest. She learns that the trees they grow on can take seven years before they produce their first crop, partly explaining why these nuts are so costly. She also discovers that their super tough shells require pressure equivalent to being sat on by a baby elephant to break them open. In the UK, Cherry visits the Eden Project in Cornwall and learns that nuts aren’t all they seem - only a small percentage of what we commonly refer to as nuts are actually botanical nuts. Peanuts are legumes and cashews are drupes. However, everything we refer to as a nut is the reproductive part of the plant and packed full of nutritional goodness.

Historian Ruth Goodman climbs a mountain in the Lake District to meet an explorer who tells her all about one of Britain’s original snack bars, Kendal Mint Cake. Its popularity grew after famous explorers Ernest Shackleton and Sir Edmund Hillary took it on their expeditions to Antarctica and Everest respectively. Ruth also visits the home of Britain’s very first cereal bar to learn how it went from simple hippy food to shifting three million bars a week.