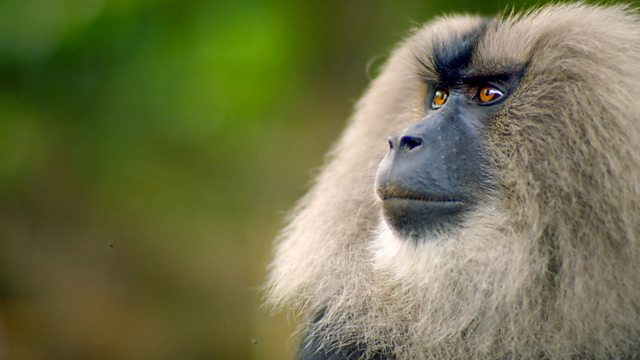 Revealing the extraordinary strategies monkeys, apes and lemurs use to survive in the most unexpected places, from snow-capped mountains to the open savannah.

Primates have conquered the world, from snow-capped mountains to dusty backstreets, impassable flooded forests and the open savannah. This episode reveals the extraordinary strategies monkeys, apes and lemurs must use to survive in the most unexpected places.

Times are hard for a troop of bearded capuchins in Brazil’s badlands. With no rain for eight months, food and water are scarce. But these monkeys can do something very few primates can: they use tools, and make them too. It is this ability that allows them to find the food they need to survive.

For other primates, the challenge is social. On a remote island off Africa’s west coast, we meet the drill, perhaps the least known monkey of all. Males must fight for their place in the hierarchy, and those who can’t compete are exiled. We meet two such outcasts, who form an uneasy association to get by.

Against the lush green backdrop of India’s Western Ghats, lion-tailed macaques have ditched cooperation for exploitation. With monsoon rains comes jackfruit season. These 10kg hulks are the largest tree fruits in the world, but how to tell which is ripe? These clever primates let giant squirrels work it out and then muscle in on the feast.

On the edge of the Congo basin, the mist-shrouded volcanic slopes are home to some of the largest and most familiar primates of all. The silverback mountain gorilla has a surprising, recently discovered strategy for success. He stakes his claim for dominance with a defiant display of strength. But when his young offspring refuse to respect his authority, he reveals his softer side. It seems this leader is more than just an aggressive guardian, he is gentle and affectionate too. The latest research shows that caring fathers are the most successful silverbacks, raising up to five times more young.

From baboons facing down a leopard to rhesus macaques charming their way to an easy life, meet the primates solving life’s problems in the most extraordinary places and in the most surprising ways.

See all episodes from Primates

See all clips from Secrets of Survival (4)