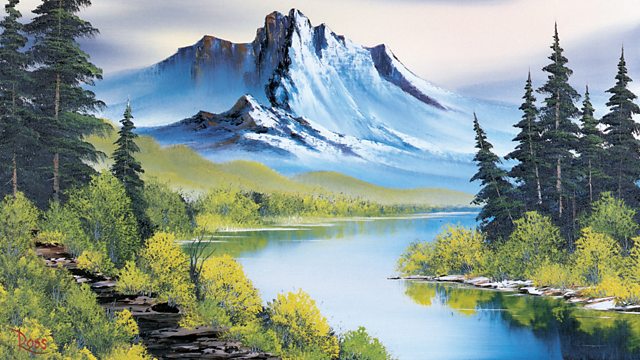 The Joy of Painting Series 1
Episode 1 of 26

Watch American painter Bob Ross as he creates a beautiful scene of mountains, evergreens, paths and bushes in just half an hour.

American painter Bob Ross offers soothing words of encouragement to viewers and painting hobbyists in an enormously popular series that has captivated audiences worldwide since 1982. Ross is a cult figure, with nearly two million Facebook followers and 3,000 instructors globally. His soothing, nurturing personality is therapy for the weary, and his respect for nature and wildlife helps heighten environmental awareness.

In this series, Ross demonstrates his unique painting technique, which eliminates the need for each layer of paint to dry. In real time, he creates tranquil scenes taken from nature, including his trademark ‘happy’ clouds, cascading waterfalls, snow-covered forests, serene lakes and distant mountain summits.

Many of Bob’s faithful viewers are not painters at all. They are relaxing and unwinding with Bob’s gentle manner and encouraging words, captivated by the magic taking place on the canvas.

Join Bob, in this first programme in the series, for a happy half hour as he creates one of his beautiful mountain and evergreen scenes, complete with paths and ample bushes.

See all episodes from The Joy of Painting