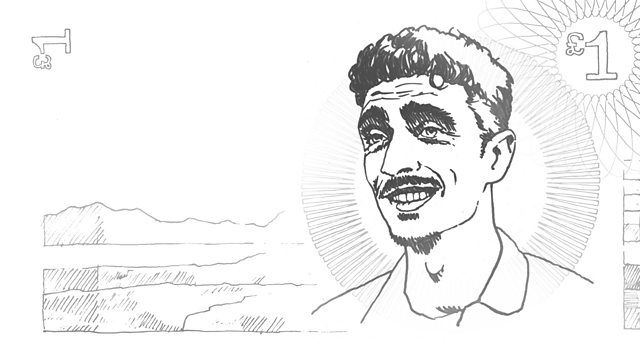 Chris McQueer, author of cult classic Hings, explores the lives of some of the great Scots who have been deemed noteworthy.

People may sometimes recognise the faces on our Scottish banknotes for the very reason that they feature on the money that we spend. However, apart from the usual suspects - such as Walter Scott, Robert Burns and Robert the Bruce - many of us have no idea who many of them are, or of their extraordinary impact on the world.

Chris McQueer, author of cult classic Hings, is on a mission to change this. In his first ever documentary, he explores the lives of some of the great Scots who have been deemed noteworthy. He also sets himself a challenge to create his very own banknote, featuring some of his heroes and the landscapes that inspire him as he travels around Scotland.

It’s an eye-opener for Chris, who feels ashamed that he has never learned about Aberdeen-born missionary Mary Slessor, who is revered in Nigeria for saving the lives of hundreds of twin babies and fighting for women’s rights. Or Dr Elsie Inglis, the Edinburgh native who was known as the 'mother of the nation' in Serbia. As part of Scottish Women’s Hospitals, Elsie worked on the frontline in Serbia during the First World War, saving countless lives.

These are just two of the incredible Scots who feature in what Chris calls his inspiring, life-affirming adventure. The fact that we don’t know their stories and don’t learn them at school understandably baffles him. He realises early on that many of those overlooked heroes of Scottish history are women, and this is something that he explores with some contemporary Scots who have inspired him. These include the Scots Jackie Kay, Rose Reilly and multimillion-selling musician KT Tunstall. All noteworthy in their own right.

But these meetings aren’t just about serious matters of history, with Chris’s inimitable and warm style bringing out the best in all of those he meets. Jackie Kay compares hearing the news of becoming Makar to a Broons sketch, KT Tunstall tells how a Hollywood studio made her a video featuring Meryl Streep and Anne Hathaway 'for free', and Rose Reilly literally brings him to his knees with a nutmeg.

Scotland is seen in all her glory as Chris visits Skye for the first time and stands in awe of the Cuillin mountains. He travels to Otter Ferry on Scotland’s 'secret coast' and takes in the views from Arthur’s Seat. He sees the oldest notes in Scotland, meets the designers and artists who create our contemporary notes, and finds out about some hidden features on our current banknotes that blow his mind.