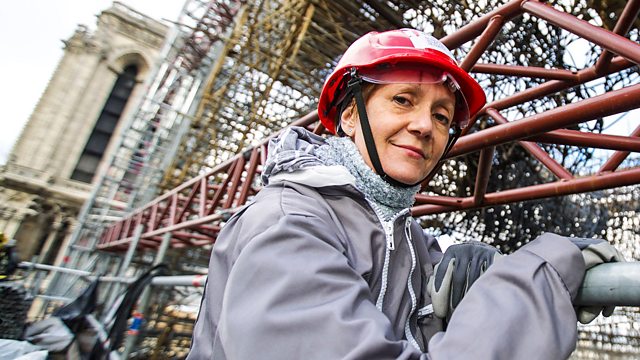 Inside the Great Cathedral Rescue

Documentary that goes inside what remains of the world-famous Notre-Dame Cathedral in Paris and follows the men and women fighting to secure the fire-ravaged structure.

Documentary that goes inside what remains of the world-famous Notre-Dame Cathedral in Paris. It is one year since the inferno devastated the vast timber and lead roof and the 850-year-old gothic masterpiece is still perilously close to collapse. Now, we follow the men and women fighting to secure the fire-ravaged structure. Lead dust from the vaporised roof contaminates the site, the stone ceiling is crumbling and a 500-tonne melted mass of scaffolding still hangs precariously over the cathedral, triggering alarms and evacuations.

Now that the cathedral walls are supported by giant timber frames, chief architect Philippe Villeneuve urgently needs a complete picture of the damage sustained during the fire. He initiates an unprecedented collaboration between architects and scientists. Their mission is to meticulously analyse the fallen timber, stone and fractured glass to develop a decontamination and restoration plan. This unique opportunity will give a new insight into the medieval materials, techniques and people who built Notre-Dame.

Inside the cathedral, glass scientist Claudine Loisel investigates the distribution of lead contamination on the stunning stained glass, comparing samples from around the building. In the lab she develops a decontamination plan using x-ray spectroscopy and identifies micro-cracks in the glass caused by ‘thermal shock’, sustained during the fire. At York Minster in northern England, conservationists are pioneering a glass preservation method that Claudine hopes will be adopted at Notre-Dame. They are installing ventilated protective glazing, which protects the medieval stained glass from harmful UV rays and the corrosive effects of moisture.

The stone vaulting has taken the brunt of the fire and will require new limestone with the same mechanical properties for the rebuild. Stone scientist Lise Leroux hunts for the origin of the vaulting stone, voyaging into the forgotten quarries beneath Paris, which are now filled with the bones of 18th-century Parisians. She finds a limestone micro-fossil signature in the lower level of the quarry that matches samples from the vaulting stones, confirming its origin. Lise discovers Notre-Dame is built from a variety of different limestone, chosen for the various structural properties needed for the cathedral.

The complex timber framework of the roof is completely destroyed. Amazingly, timber scientist Catherine Lavier still finds markings from the medieval carpenters on the burned beams and her tree-ring analysis of the timber tells the life story of the oak used. One team of carpenters still uses medieval tools and techniques to fell and carve beams for a chateau restoration, proving the skills and timber still exist in France to rebuild Notre-Dame’s lost roof framework. A 3D scan of the geometrically complex timbers of Notre-Dame offers the team a possibility to eventually rebuild the roof in the same way, down to the last millimetre.

The data from the scientists is combined into a groundbreaking ‘digital twin’ of Notre-Dame that will help them restore and rebuild the cathedral. This 3D dynamic map gives the team a complete view of every inch of the structure, before and after the fire, allowing them to click on an individual stone to see its chemical composition, its mechanical properties and its history within Notre-Dame over time.

See all episodes from Rebuilding Notre-Dame