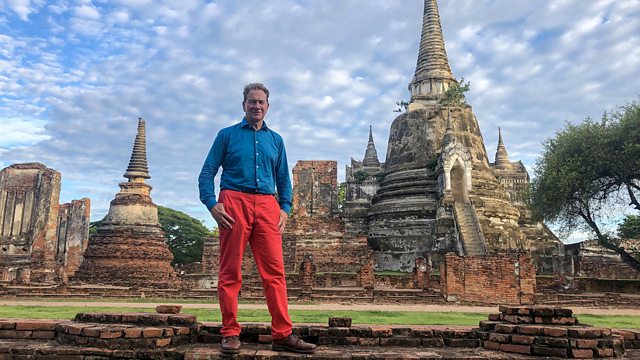 Chiang Mai to the River Kwai

Michael Portillo embarks on a two-part adventure through Thailand. Michael helps out at an elephant hospital, tries his hand at the art of umbrella-making and learns about northern Thai cuisine.

Steered by his 1913 Bradshaw’s Guide, Michael Portillo embarks on a two-part rail adventure through Thailand, from the northern city of Chiang Mai to Kanchanaburi on the River Kwai and from Bangkok to the southern beach resort of Hua Hin.

On this leg, Michael helps out at an elephant hospital, where they care for animals wounded by landmines and other injuries. He tries his hand at the art of umbrella-making and learns about northern Thai cuisine.

Michael explores the walled and moated city of Chiang Mai, former capital of the Lanna Kingdom before it was annexed by the king of Siam. Travelling south to Lampang, Michael discovers the former centre of the teak wood business and investigates how successive Thai kings preserved their independence from the rival colonial powers of Britain and France. He discovers the history of a British governess at the royal court and learns how Britain used her consulate to promote her influence in the kingdom.

At what was once one of the greatest cities in Asia, the former Siamese capital Ayutthaya, Michael admires the gigantic ruined temples.

There is a trip to an unusual market - a must for any self-respecting train-lover. And Michael finishes this leg of his Thai journey close to the border with Myanmar to ride one of the world’s most notorious railway lines and, for him, the most poignant - the Death Railway.