BBC Two
Back in Time for the Corner Shop
Main content 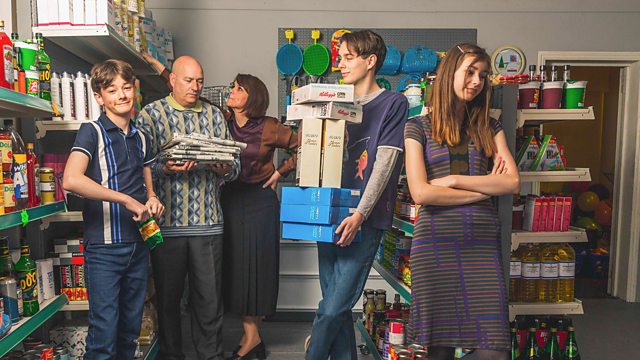 The Arderns go back in time to run a corner shop through the 80s and 90s. Selling everything from Ice Magic to lottery tickets, they learn how life behind the counter reflects two decades of change.

This time, the family are running a shop through the 80s and 90s. No longer the primary shopping destination, the corner shop is now where people go for last-minute top-ups and impulse buys. Making the most of every inch of space, the shop now stocks over 2,000 different items, compared to less than 100 when it first opened in 1897. While booze and everyday essentials like bread and milk are still top sellers, they now share shelf space with hair mousse, extra-strong bleach, pencil cases and even playing cards with kittens on.

To attract the crowds, the Arderns take inspiration from an iconic marketing campaign of the early 80s – the Pepsi challenge. Potential shoppers are lured in with a corner shop version pitting 80s classics Panda Pop and Rola Cola against each other. Once they are through the door, Sam is determined to make the most of his customers. Copying the techniques of the big supermarkets, he has put household essentials right at the back. Unsuspecting shoppers heading in for bread and teabags are tempted to spend a bit more as they walk through the packed shop. Kerching!

The early 80s saw huge economic change and, in industrial cities like Sheffield, it brought recession and unemployment. Customers who experienced it first-hand visit the shop and chat to the Arderns about how they coped with no job and no money, and how corner shops helped regular customers put food on the table by offering credit.

Sheffield may have suffered as its steelworks fell into decline, but some residents found new ways to succeed. Sara brings avid gamers Sam and Ben some brand new tech - a ZX Spectrum. The first affordable computer, it helped kick-start the UK’s gaming industry. A handful of teens in Sheffield began to design their own ZX games. Within just a few years, Sheffield was home to several multimillion-pound gaming companies.

It wasn’t just tech where Sheffield led the way - some of the greatest bands of the 80s were from the city. Human League, Heaven 17, Cabaret Voltaire and, of course, ABC all started out there. ABC’s Martin Fry visits the shop to explain how his band were able to make the most of empty industrial units, using them as cheap rehearsal space. Where industry had died out, artists soon flourished, and the city’s creative scene became legendary. Ex-ABC fan club member Jo is just pleased to meet her teenage crush.

In 1985, the Arderns celebrate one of the decade’s most defining moments, Live Aid, with their own charity event – a baked bean bath. Once more, the shop is the centre of the community as regular customers donate spare cash for the privilege of emptying a can of beans onto their favourite shopkeeper’s head - the cheap beans, of course.

By 1992, Sheffield was home to 70 different nationalities. This diverse community affected what was on the shelves, both as shopkeepers and customers. Magid Magid pops in to chat about how corner shops provided everyone with a taste of home, keeping one step ahead of the supermarket. Well before Tesco’s world food aisle, it was the local shop that people popped into for coconut milk and jerk spice.

Surviving as an independent shopkeeper was getting harder and, in 1994, the only advantage corner shops had over the supermarkets was taken away by the Sunday Trading Act. Until now, bigger shops couldn’t open on Sundays, which meant many corner shops took half their takings on this day. But after years of lobbying, the big supermarkets finally persuaded the government to change the law. Now any shop could open on Sunday. For corner shops, it was devastating – 8,000 shut up shop in the next few years. There was one silver lining - this year also saw the launch of the National Lottery. With shopkeepers taking a cut of any tickets sold, selling lottery tickets could add up to £9,000 to yearly profits.

In 1997, the Arderns celebrate 100 years of running the shop. The family reflect on what they have experienced and how their little shop has reflected a century of change. It is time to close the shutters for the last time and say goodbye to the corner shop.

See all episodes from Back in Time for the Corner Shop