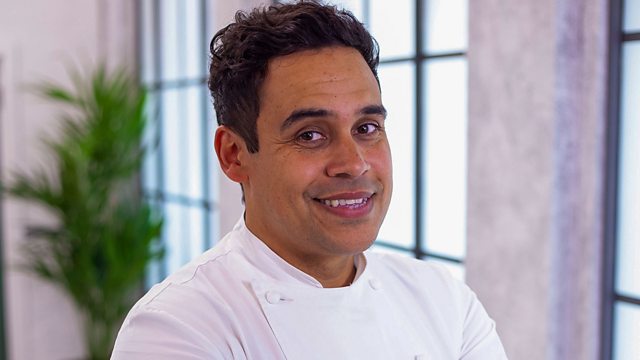 The remaining chefs cook giant goose eggs based on Charlie and the Chocolate Factory and a Harry Potter dessert, but two face potential disasters when their recipes go wrong.

The three chefs are halfway through their heat and the pressure is mounting. Once again, they each serve a unique take on the brief. For mains, there is a winter feast of roast deer, pumpkin three ways and venison compote, inspired by CS Lewis’ The Silver Chair. Another chef is going all out creating goose leg with a haricot bean cassoulet served in a pig’s bladder that will be inflated and sprayed to look a goose egg from a Roald Dahl adaptation of Charlie and the Chocolate Factory. And there is an homage to the three farmers Boggis, Bunce and Bean from Fantastic Mr Fox. As the chefs get ready to serve, one of them comes close to disaster.

After the nail-biting scoring on the mains, presenter Susan Calman asks the chefs to prepare a pre-dessert, or pre-pudding pudding as she likes to call it. This is the second of the new mini courses that will be served at this year’s banquet celebrating the success of children’s literature. Veteran Judge Paul Ainsworth blind tastes and ranks the dishes in the case of a tie today, so the chefs need to produce the very best dishes they can.

After a glimpse of their pudding skills, it is on to dessert. There is a chocolate hazelnut parfait that resembles a chocolate bar served with honeycomb and froth inspired by Charlie and the Chocolate Factory, Harry Potter chocolate frogs and tapioca spawn and a Winnie the Pooh dessert with a wild honey jelly and toasted brioche. Which will prove to be a best seller?

Only two chefs can proceed to Friday’s judging and have a chance to represent the central region at the regional finals. 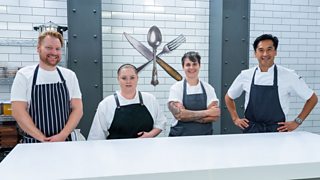