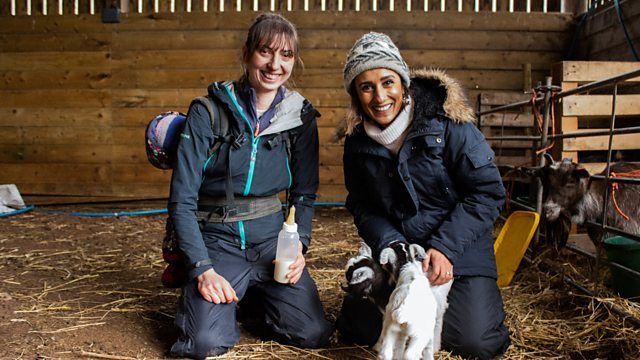 The team are at the Holnicote Estate in Somerset for International Women's Day. Anita Rani meets a local group that aims to reduce the isolation often felt by women who live and work on farms.

It’s International Women’s Day, and we’re in Somerset on the Holnicote Estate. Anita Rani meets Holly Purdey who farms with a baby on her back and her three-year-old as her farmhand. She’s part of a local Women in Farming group that aims to reduce the isolation often felt by women who live and work on farms.

Meanwhile, Matt Baker finds out that the picturesque Holnicote Estate is at the beginning of an innovative river restoration project that is the first of its kind in the UK. It is also home to a new family of beavers.

It's a busy day on Adam Henson's farm as he gets ready for the lambing season, and our special guest reporter, the 'Red Shepherdess' Hannah Jackson, looks at whether times have really changed for women in farming.

This week our special guest reporter, Hannah Jackson - also known on social media as the Red Shepherdess - looks at whether times have really changed for women in farming.

On her journey to find out why there are so few female farmers, Hannah heads to Scotland to meet Nina Clancy, the head of a charity that supports those who work the land.

Hannah also meets Andrew McCornick, of the National Farmers' Union Scotland, to see how the traditional face of farming is changing.

Hannah also has an online catch-up with Faye Steward, who made headlines when she rescued her sheep from flooding, before finally seeing what the future holds with the help of Professor Sally Shortall.

Countryfile has asked four young naturalists to share their passion for wildlife and the countryside - what inspires them, their love of nature and their hopes for the future.

Mya and her family live in the Chew Valley, overlooking the lake known for the 260 different bird species that over winter there.

Mya’s passion for birding began with her parents driving the length and breadth of the country spotting rare birds.

Mya took the hobby one step further and her dedication to birding means she has now spotted more than half of the world's known bird species. We join Mya on the lookout for Great White Egrets at Chew Valley Lake.