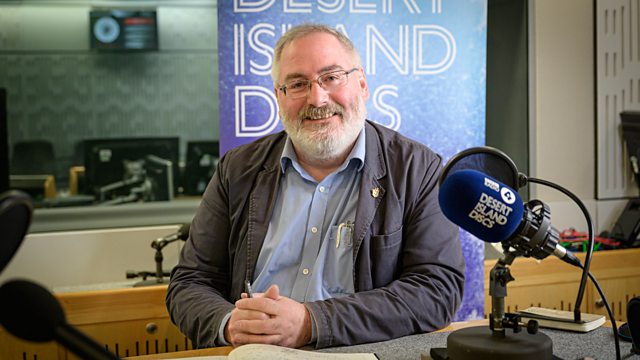 Chris Riddell, illustrator, author and political cartoonist, shares the eight tracks, book and luxury he would take with him if cast away to a desert island. With Lauren Laverne

Chris Riddell is an illustrator, author of children’s books and a political cartoonist. From 2015 to 2017, he was the Children’s Laureate, and he has won three Greenaway Medals for his work – more than any other illustrator.

He was born in 1962 in Cape Town, South Africa, where his parents were both anti-apartheid activists. They moved to the UK when Chris was a year old. He grew up first in rural England, and later in south London where his father, a vicar, became chaplain of Brixton Prison.

He started drawing as a young boy when he was given paper and pencils by his mother to keep him quiet during his father’s sermons. After school, he studied illustration under Raymond Briggs at Brighton Polytechnic and received his first commission while still at art school. As a writer his work ranges from picture books to chapter book series including Ottoline and Goth Girl, and as an illustrator he has frequently collaborated with authors such as Paul Stewart and Neil Gaiman.

He started as a political cartoonist in the late 1980s and has drawn the Observer’s weekly cartoon since 1995, celebrating 25 years at the paper this year. As Children's Laureate, he encouraged children to draw, and championed the importance of school libraries and librarians.

Chris is married to Jo, a fellow illustrator and printmaker, with whom he has three grown-up children, among them Katy, another illustrator.

BOOK CHOICE: Alice’s Adventures in Wonderland and Alice Through the Looking Glass, with the Tenniel illustrations.
LUXURY ITEM: Sketchbooks and pens
CASTAWAY'S FAVOURITE: Fantasia on a Theme of Thomas Tallis, composed by Ralph Vaughan Williams, conducted by Sir John Barbirolli, performed by Sinfonia of London