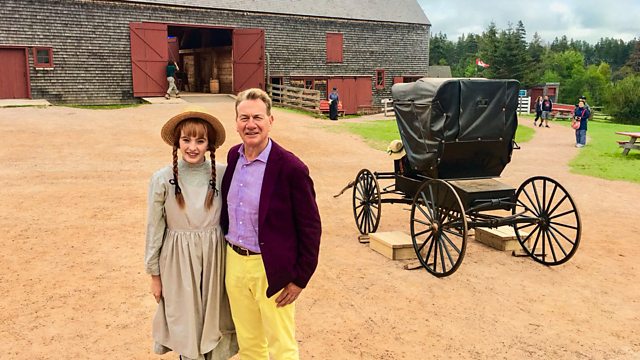 Michael Portillo begins a new journey on the tracks of the Ocean line to explore Canada’s maritime provinces en route to Quebec City.

Michael Portillo begins a new journey on the tracks of the Ocean line to explore Canada’s maritime provinces en route to Quebec City.

Clutching his 1899 Appleton’s Guide to Canada, he begins in the Atlantic port of Halifax, Nova Scotia, where he discovers an 18th-century British hilltop citadel, manned at the time of his guide by the 78th Highland Regiment. Michael joins the men who recreate the roles of those Scottish soldiers today. At the mercy of the young 'sergeant major', Michael learns the drill in kilt and sporran.

Michael follows his Appleton’s to a vast Victorian dry dock, still in use today by shipbuilders for the Royal Canadian Navy and finds out what it takes to build a state-of-the-art Arctic Patrol vessel. He learns of a catastrophic explosion in Halifax harbour in 1917, which killed 2,000 people and left 25,000 homeless. Former residents of an African-Canadian community torn in two by the railway tell Michael of their struggle for redress.

Paddling along the Shubenacadie Canal, he discovers a 'marine railway', and on Banook Lake, he joins 15 'warriors' preparing for battle in a war canoe.

In the picturesque harbour town of Pictou, Nova Scotia, Michael discovers the first wave of Scots to settle in the region, who arrived on board a ship named Hector. Aboard a replica of the 18th-century vessel, he hears of their gruelling 11-week voyage across the Atlantic and is invited to join young dancers in a Scottish reel. At the Northumberland Fisheries Museum, Michael investigates what it takes to keep Nova Scotia’s top export on the menu.

From Caribou, Michael catches the ferry to Prince Edward Island to meet its most famous resident at her beautifully kept home. Charmed by the red-haired Anne of Green Gables and her fiery temper, he heads to the island’s provincial capital, Charlottetown, to see her record-breaking musical.