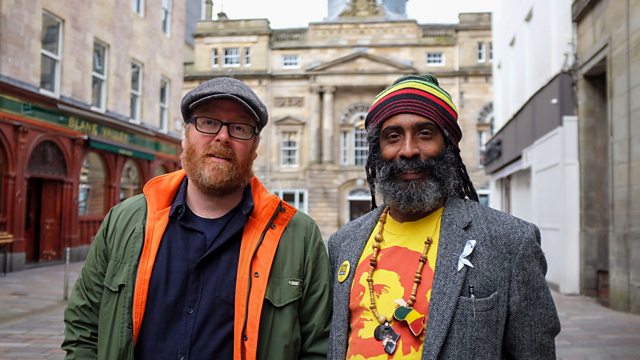 Frankie travels from Oban to Glasgow. His journey takes him from a submarine base to Bannockburn, before he helps paint a mural in Glasgow and explores the city’s darkest chapter.

Frankie embarks on his last journey of the series, travelling from Oban to his home town of Glasgow. As he is contractually obliged to have a theme for each journey, on this leg he is looking at creativity and how it applies to the ways in which Scotland thinks of itself. Travelling through the stunning glens of the Highlands, Frankie visits the home of one of the world’s most critically acclaimed comic book writers, Grant Morrison. Grant has written stories for some of the comic world’s most iconic characters, such as Batman, Superman, Wonder Woman, the X-Men, Spiderman and Judge Dredd. Grant’s home sits across from a base for nuclear submarines, and Frankie wants to chat to Grant about how his childhood fascination and fear of 'the bomb' has affected his writing and may have led him to writing superhero stories.

From superheroes to Scotland’s most famous hero, Frankie travels from Dunoon to Bannockburn, the site of Robert the Bruce’s most famous battle. There he meets battle re-enactor John Lyons and finds out how to fight with a sword and a shield, just like the Scots knights of the 1300s.

After his fight in a field, Frankie heads to Glasgow, where he finds out how a group of young artists are brightening up some of the darker corners of Glasgow’s cityscape. Over the last decade, murals have sprung up all over Glasgow, and one group behind this street art renaissance is the Cobolt Collective. Frankie joins the four-woman team as they paint a huge mural that celebrates some of Glasgow’s most iconic buildings. Despite being on top of a swaying scissor lift, Frankie manages to keep a steady hand and helps out with painting the mural.

Although murals can brighten up the streets of Glasgow, they can’t paint over one of the darker chapters in the city’s history. Much of Glasgow’s grand architecture and wealth was created off the back of slavery in the British colonies, and some streets still commemorate the merchants who profited the most from trade in humans. Frankie meets local councillor Graham Campbell to find out how Glasgow should do more to confront its shameful past.

After touring the streets of the Merchant City with Graham, Frankie makes his way to the King's Theatre in Glasgow for his last gig of the series.

See all episodes from Frankie Boyle's Tour of Scotland

See all clips from Oban to Glasgow (2)