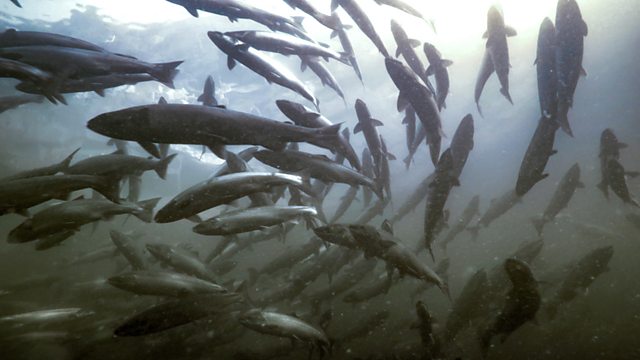 A Tale of Two Fish: Salmon, the wild and farmed

Dan Saladino investigates wild Atlantic salmon's possible extinction within 20 years. He travels from rivers on Scotland's east coast to fish farms in the west to plot the decline.

Dan Saladino investigates the possible extinction of wild Atlantic salmon within 20 years. Dan travels from the River Spey on Scotland's east coast to fish farms in the west in order to plot the decline of one species, the wild salmon, and the rise of another, farmed salmon.

From a population that was close to ten million, wild Atlantic Salmon numbers are now down to below two million. It's cousins further south, the wild Pacific Salmon hasn't seen declines of anything close to this.

The author of the ground breaking food books on Salt and Cod, Mark Kurlansky has now turned his attention to the decline of the wild salmon and tells Dan some of the factors that are causing the crisis, from the pollution and dam building in the 19th century, to overfishing on the 20th and the effects of climate change on the oceans in the 21st century. Because the fish goes from being a freshwater fish to becoming an ocean going one, salmon provides, Kurlansky argues, the perfect barometer for how we how humans are treating our our planet, both the land and the oceans.

Mark Bilsby of the Atlantic Salmon Trust adds his concerns about the impact the salmon farming industry is having on the wild fish population, from the huge numbers of sea lice that can radiate out from farm pens, containing thousands of fish, out the sea, infecting wild salmon. Escaped fish are also a problem he says. Earlier this year, more than seventy thousand farmed salmon escaped from one pen because of storm damage, Bilsby says events such as these are resulting in a weakening of the salmon's gene pool as the domesticated (and genetically different) farmed fish is now breeding with the wild species.

Rory Campbell and Ian Roberts of Mowi, the world's biggest producer of farmed salmon explain the changes they are making in order to make their industry more sustainable and how schemes such as the Aquaculture Stewardship Council are helping to bring lice levels down and improve welfare standards.

What Is Making My Child Fat? Part 2: The Debate and Your Questions.