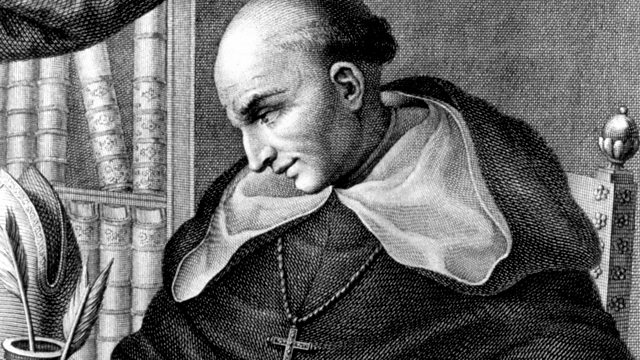 Melvyn Bragg and guests discuss the influential debate in 1550 over whether it was right or not to enslave the people who lived on Spain's newly conquered land in the Americas.

Melvyn Bragg and guests discuss the debate in Valladolid, Spain in 1550, over Spanish rights to enslave the native peoples in the newly conquered lands. Bartolomé de Las Casas (pictured above), the Bishop of Chiapas, Mexico, was trying to end the encomienda system in which those who now owned the land could also take the people in forced labour. Juan Gines Sepulveda, a philosopher, argued for the colonists' property rights over people, asserting that some native Americans were 'natural slaves' as defined by Aristotle. Valladolid became seen as the first open attempt by European colonists to discuss the ethics of slavery, and Las Casas became known as 'Saviour of the Indians' and an advocate for human rights, although for some time he argued that African slaves be imported to do the work in place of the native people, before repenting.

John Edwards
Faculty Fellow in Spanish at the University of Oxford

Battle of the Teutoburg Forest

The Evolution of Horses

Caroline Dodds Pennock at the University of Sheffield

John Edwards at the University of Oxford

Julia McClure at the University of Glasgow

A Short Account of the Destruction of the Indies by Bartolomé de las Casas (trans. Nigel Griffin, Penguin, 1992)

Lewis Hanke, The Spanish Struggle for Justice in the Conquest of America (first published 1949; Andesite Press, 2017)

Lewis Hanke, All Mankind Is One: a Study of the Disputation Between Bartolomé De Las Casas and Juan Ginés De Sepúlveda in 1550 on the Intellectual and Religious Capacity of the American Indians (Northern Illinois University Press, 1994)