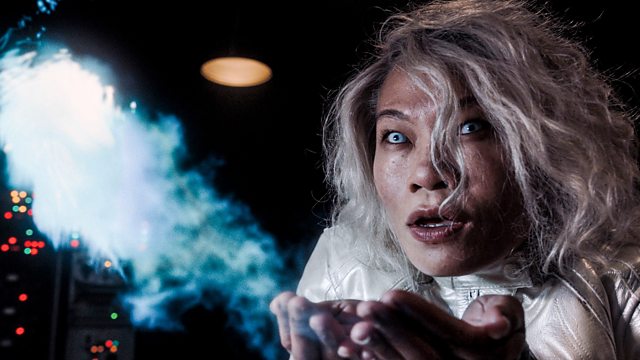 Aziraphale is discorporated but possesses Madame Tracy during a seance. Crowley drives his Bentley through a flaming motorway. Adam and the Four Horsemen begin the apocalypse.

Crowley rushes to Aziraphale’s bookshop, desperate to escape Earth together, and is aghast to discover the shop aflame. He runs inside and rescues the copy of The Nice and Accurate Prophecies of Agnes Nutter. Then he walks out of the burning building and heads off on a mission of his own. Convinced he has the power to exorcise demons, Shadwell returns home to Madame Tracy.

Aziraphale finds himself in Heaven, and in trouble – he has no flaming sword, and his earthly body has been discorporated. He tries to return to Earth without a body.

Adam has taken complete control of Them. He's floating in the air, monstrous and scary. Adam says that new friends of his are arriving imminently.

Newt is in a post-coital glow, and Anathema’s mission to halt Armageddon continues. They work on deciphering more of Agnes’s prophecies.

After Aziraphale's discorporation, Crowley is determined to get as drunk as possible. An immaterial Aziraphale appears and tells Crowley to head for Tadfield airbase.

The three guests at Madame Tracy's seance arrive. The Four Horsemen of the Apocalypse rendezvous in a little cafe.

Madame Tracy's seance has some surprises in store.