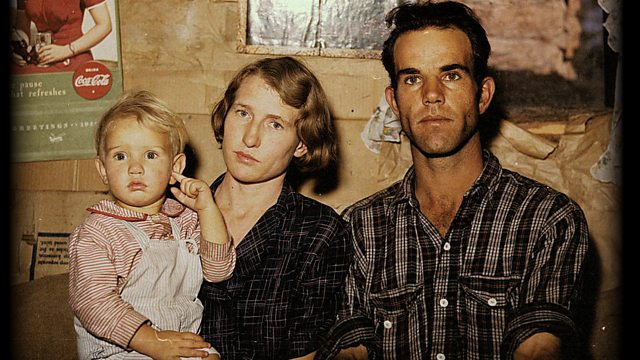 Meet the Family looks at the depiction of families in cinema, in all their maddening, dysfunctional glory. From Home Alone to Tokyo Story, and from Pan's Labyrinth to Gosford Park - it's all relative.

Meet the Family, voiced by Kathy Burke (Nil by Mouth, Tinker Tailor Soldier Spy), puts cinematic families on the analyst's couch for a deep dive into what makes some of the most dysfunctional dynasties in cinema tick.

How do film-makers go about dramatising the one thing we all have in life - family? Maybe it's about drawing directly from your own life, like Christina Crawford's account of being raised by a nightmare mother, A-list star Joan Crawford, in the infamous Hollywood scandal magnet, Mommie Dearest. Or maybe dramatising the furthest extremes that families will go to needs to involve fantasy, as in magical Oscar-winning fairy tale, Pan's Labyrinth, where a little girl escapes from her wicked stepfather into a dreamlike but dangerous underworld.

Even when film-makers have their familial inspiration sorted out, families on the big screen still pose unique challenges, even to the greatest directors in cinema. How can you possibly make every single family member in a massive cinematic ensemble like Gosford Park memorable, when even people in real life have trouble remembering who their second cousins are? How do you know where to start and finish your story about a family, when every family stretches back through infinite generations? Perhaps, like Lars von Trier, you could start with the end of the world. And what about empathy? How do we know who to root for in a film like American Beauty, which only gives us one side of the story?

Through the lens of films as varied as 8 Mile, Do the Right Thing, Tokyo Story, Aliens, Bicycle Thieves, The Hangover III, Dead Ringers, Home Alone, Ratcatcher, Back to the Future and many more, we zoom in on families in film, discovering how film-makers have imagined them on the big screen - and what that tells us about our place in our own families.