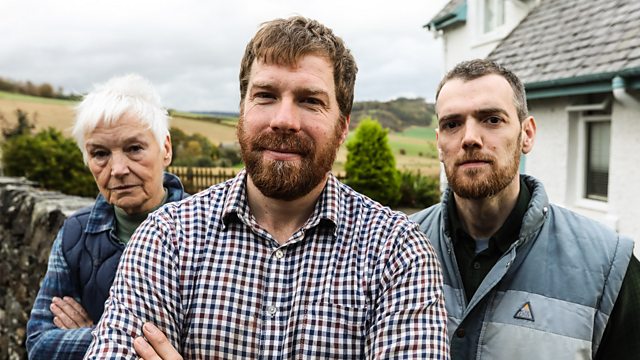 Comedy following the adventures of farmer Jim MacDonald, his loyal farmhand Donnie and his straight-talking mother.

Comedy following the adventures of farmer Jim MacDonald on his mixed farm in rural Perthshire, Scotland. A proud, traditional man, who cares deeply about what he does, Jim struggles and is often wounded, but he is never beaten.

By Jim’s side is his hard-to-please mother, who often delivers blistering home truths, and his intensely loyal farmhand, Donnie, who is optimistic beyond naïve and would rather die than let Jim down.

Alongside the struggles against the elements – and each other - Jim is also unlucky in love and would like nothing more than to meet a partner to help him run the place.

This half-hour special collects five of the finest BBC iPlayer shorts. In Bull, Jim puts his bull out to mate before worrying about his own love life and the new vet, while in Sheep, Jim is in crisis mode as his best sheep, Bessie, goes missing. In Fence, Jim then gets involved in a bitter turf war with his neighbour over a fence, while in Dog, Jim suffers heartbreaking news and doubts he can ever replace his best friend, Mitch. And in Machines, the baler breaks down and Mother is on the warpath as it could put her big birthday night out in jeopardy.

See all episodes from The Farm