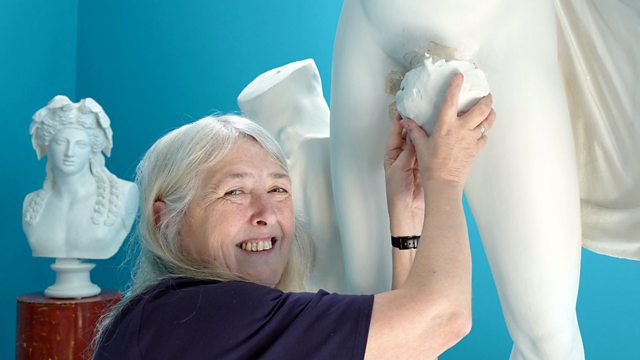 With distinctive wit and flair, Mary Beard takes a personal view of the nude in Western art and its troubling power to provoke ideas about gender, sex and moral transgression.

In the first programme of her provocative two-part essay, classicist and broadcaster Mary Beard takes on the nude.

From the Ancient Greeks to the taboo-busting painters and sculptors of today, Mary gives a deeply personal take on naked bodies in art. Just why are artists so interested in nudity? What can art reveal about our own attitudes to the body? For Mary, the nude stands on some of the deepest fault lines running through society, speaking to issues of men, women, gender and sex gender, sex and moral transgression.

Mary starts by exploring the very first full-size nude sculpture in Western art - an Aphrodite by Praxiteles, depicting the goddess as if she has been accidentally interrupted as she bathed. Mary argues it is a clever 'alibi' to avoid accusations of lewdness from viewers, which set the tone for nude female artworks, from the ancient world to the Renaissance and beyond.

At Florence’s Uffizi gallery, the Venus de Medici became a 'must see' artwork during the 18th century 'Grand Tour'. Young men flocked to see this statue of a beautiful woman, but was this because it was 'art' or did it also appeal to baser instincts? Mary also looks at one of the very first reclining nudes in Western art, Titian’s Venus of Urbino. One of the most revered artworks ever, it is no coincidence it is an illustration of a male sexual fantasy. Mary asks how a woman like her should respond to the artwork.

Mary then considers the challenge of depicting the female nude for a woman artist, looking at one of the greatest 17th-century painters, Artemisia Gentileschi. In the Biblical story of Susanna and the Elders, the virtuous Susanna is blackmailed by two lecherous old men who surprise her as she bathes, threatening to accuse her of adultery if she doesn’t have sex with them. Mary reveals it is a fascinating work that takes on a whole deeper resonance when you know Gentileschi had herself been raped. She also looks at Gentileschi’s choice of subject as an artist having to earn her living.

In a life-drawing class, Mary joins a hen party as they draw a naked male. It is a lot of fun, but for centuries would have been impossible, as women were forbidden to study a naked man in this way. Of course, the most famous nude male sculpture in Western art is Michelangelo’s David. Mary reveals how, for centuries, his private parts were covered with a fig leaf. It was one way prudish censors have dealt with the 'shock of the nude', but these days that is changing. Mary finds out at Cork’s Crawford Art Gallery as she rolls up her sleeve to remove a plaster fig leaf, and discovers what lies beneath.

The nude in art can often have a deep sexual allure - even when the subject is highly religious. The Christian martyr Sebastian was tortured with arrows - but depictions of this horrific scene has seen the figure transformed into an erotic gay icon. Mary looks at how the nude has always brushed up against eroticism and asks what is the line between the alluring and the pornographic? This is especially true of one painting Mary sees at Paris's Musée d’Orsay. Gustave Courbet’s The Origin of the World is still shocking, a stark image of a woman's genitalia and pubic hair, devoid of any identifying features.

Our cultural attachment to the nude is deep-rooted. At Manchester Art Gallery Mary meets artist Sonia Boyce who, in an art intervention, removed (temporarily) J Waterhouse’s much-loved painting Hylas and the Nymphs. It caused a national furore amidst accusations of censorship, extreme political correctness, even links to book-burning. Why did feelings run so high? The Western nude, Mary argues, is a peculiar creation, and this is exposed even further if you take a global perspective. Dr Gus Casely-Hayford, an expert in African art, shows Mary the centrepiece of a vast Yoruba headdress - a naked woman, but one which meant something very different to the culture she came from, and it was all about community, not sex.

Finally, Mary talks to artist Jemima Stelhi about her photographic work Strip, in which a woman takes her clothes off in front of a succession of men, challenges viewers to think again about the relationship between the naked body and the artist. It is a deeply modern take on an age-old subject – one which continues to make us ask tricky questions about ourselves and how the naked images of others makes us feel.

See all episodes from Mary Beard’s Shock of the Nude