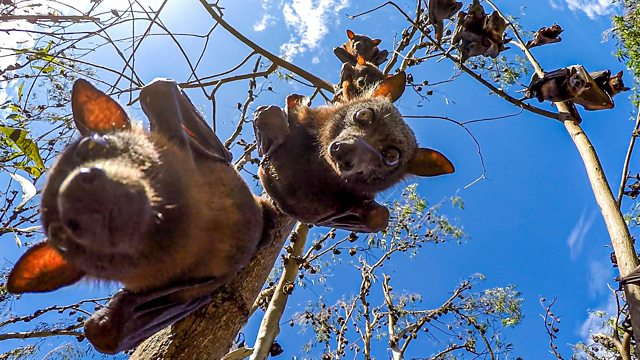 The spy creatures infiltrate a hippo pod, a nursery of red flying foxes and the secret world of pygmy forest elephants.

Our Spy Creatures investigate the extraordinary wildlife that thrives in the tropics and the events and gatherings that happen across the year.

For the first time, our Spy Creatures record how gorillas sing when they are enjoying their meals, and in a comical moment they experience the noisy after-effects of their vegetarian diet. In Brazil, Spy Jaguar Cub explores a beautiful gathering of water birds, capybara and caiman, and joins Spy Caiman to film a feeding frenzy as its wild counterparts go fishing. In Costa Rica, Spy Turtle and Spy Vulture gain an insider’s view of the spectacular turtle arribada as thousands jostle for a place on the beach to lay their eggs. In Zambia, Spy Hippo takes us into the heart of a hippo pod, and is too close for comfort as it films a dramatic fight.

Spy Dolphin and a host of other Spy Creatures, such as Spy Monkey, Spy Sloth and Spy Macaw, take us into the mysterious world of the Amazon’s flooded forest, and in northern Australia, Spy Bat becomes immersed in a nursery of little red flying foxes and joins them on the wing as they risk getting snapped up by hungry freshwater crocodiles. Spy Orangutan returns to Borneo to investigate the extraordinary bulbous-nosed proboscis monkey and some curious orangutans. In incredible scenes, Spy Baby Elephant uncovers the secret world of pygmy forest elephants, and in a thrilling finale, Spy Penguin and Spy Seal join Humboldt penguins as they bravely navigate thousands of angry sea lions as they try to return to their hungry chicks.