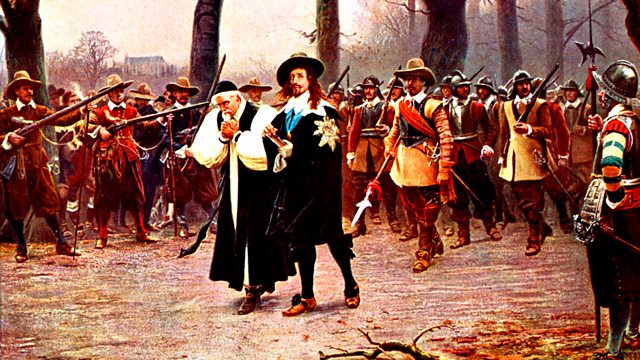 Oliver Cromwell’s Protectorate in the mid-seventeenth century lasted a mere six years and was England’s sole experiment in republican government. The historian Paul Lay tells Andrew Marr how Cromwell forged both his foreign and domestic policy according to God’s will - including waging wars in the Americas.

Protestant separatists are at the heart of Stephen Tomkins's recreation of the journey of the Mayflower, three decades before Cromwell’s rule. Escaping religious persecution, the Pilgrim Fathers built their version of a brave new world in America.

In the 400 years since the sailing of the Mayflower the USA has become a world superpower. Lindsay Newman from Chatham House looks at President Trump’s foreign policy decisions, especially in relation to Iran, and examines the political ideology that drives them.

It is 70 years since the death of George Orwell. The academic Lisa Mullen explores the contemporary relevance of his writings on political and religious ideology, republicanism and the freedom to express heretical views.

Stephen Tomkins is a writer, broadcaster, editor and speaker.

The Journey to the Mayflower: God’s Outlaws and the Invention of Freedom is published by Hodder & Stoughton.

Mayflower 400: Legend and Legacy is the national commemorative exhibition for the Mayflower 400 anniversary, opening at The Box in Plymouth on 16th May 2020. It has been co-curated with the Wampanoag Advisory Committee. For further information please visit www.theboxplymouth.com

Paul Lay is editor of History Today. He is a Fellow of the Royal Historical Society, Senior Research Fellow at the Humanities Research Institute, University of Buckingham, and a trustee of the Cromwell Museum, Huntingdon.

Providence Lost: The Rise and Fall of the English Republic is published by Head of Zeus.

Dr Lisa Mullen is a Teaching Associate in Modern and Contemporary Literature and Film at Cambridge University, and a Bye Fellow and Director of Studies at Downing College.

Orwell Unwell: Pathology and the Medical Imaginary in the Fiction and Journalism of George Orwell (in preparation).

Dr Lindsay Newman is Senior Research Fellow in the US and Americas Programme at Chatham House.