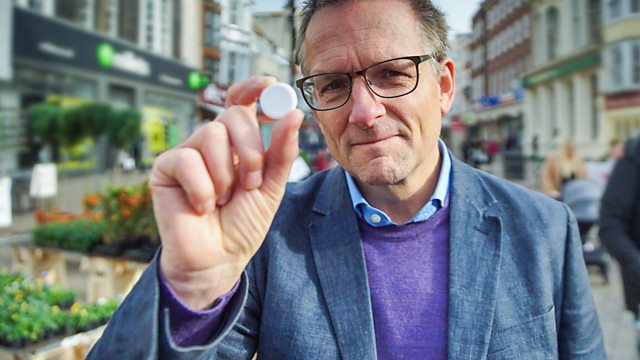 Dr Michael Mosley immerses himself on the frontline of our prescription painkiller habit. In America, it is an epidemic. Now, new evidence raises concern about the UK's use of prescription opioids.

The opioid epidemic has devastated America. But what is the situation here? A new report from Public Health England raises serious concerns about Britain's own relationship with painkillers. Dr Michael Mosley embarks on an immersive journey to Britain’s opioid frontline and meets patients struggling with addiction and GPs fighting a constant battle to help those suffering from chronic pain. He also uncovers worrying evidence of people abusing over-the-counter opioids and discovers how easy it is to buy strong opioids online.

Nearly six million people in England and Wales were prescribed an opioid last year. Michael wants to uncover how and why we are consuming twice the amount of opioids as 20 years ago, especially when the scientific evidence he encounters disturbingly suggests that for the majority of people taking them for chronic pain, these drugs mostly don’t even work. Though a vital tool in our doctors’ armoury to combat acute pain and in cancer and end-of-life care, the Public Health England report revealed that more than half a million people have been on opioids for more than three years.

Michael cautions that people taking these drugs should not suddenly stop taking them. Nevertheless, as he discovers, long-term or high-dose use does leave them exposed to greater risk of side effects including dependency, addiction and even accidental death by overdose.

As many as 28 million Britons endure chronic pain – and if we are to kick what seems like a dangerous national opioid habit, Michael believes that the critical issue is deprescribing. Millions now require help coming off opioids and drug-free alternatives to them. For Michael, this is nothing short of a challenge as important as the fight against cancer and heart disease.

So how much do people on the ground really know about these powerful painkillers, some of which, including fentanyl, can be many times stronger than heroin? On his travels, Michael meets Karen in Hastings, who now believes her five years on increasingly strong opioids ‘turned her into a zombie’. But he also encounters Brenda in Salford, who thinks the morphine she has taken for 15 years to help with her excruciating back pain is the thing that makes her life just about bearable. And he spends time with Vicki, whose 50+-a-day over-the-counter painkiller habit led to overdose and near death before she finally admitted her addiction and started detox.

See all clips from Addicted to Painkillers? Britain’s Opioid Crisis (3)