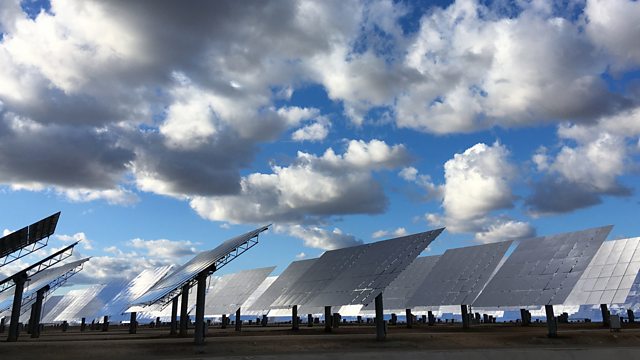 The World Turned Upside Down
Episode 2 of 2

James Landale explores the global transition from fossil fuels to renewables and assesses the geopolitical consequences of this energy revolution.

In the plains of Andalusia, just outside Seville, a giant tower stands bathed in a supernatural glow. This futuristic spectacle is a solar power station generating enough electricity to power a town - by day, and extraordinarily by night. It is just one part of a technological movement with revolutionary political consequences.

For more than a century, the world has revolved around fossil fuels. Wars have been fought over them. The nations that had oil and gas had power. They controlled the price, they controlled the supply and could tell their customers what to do.

The BBC's Diplomatic Correspondent, James Landale, now explores what will happen as countries around the world develop enough renewable energy to end their dependence on hydrocarbons and assesses the geopolitical consequences of this energy revolution.

How long will the transition take? Will the powerful oil and gas producers in the Middle East reform in time or will their economies implode, leaving failed states, regional conflict and a population exodus? How will Russia respond if Europe no longer needs so much of its gas? And which countries will be the new energy superpowers? Who will control resources like lithium and cobalt that will be needed for new high tech batteries?

Above all, who will call the shots in this new renewable world order?

The energy revolution is coming and it could change our world forever.

See all episodes from The World Turned Upside Down