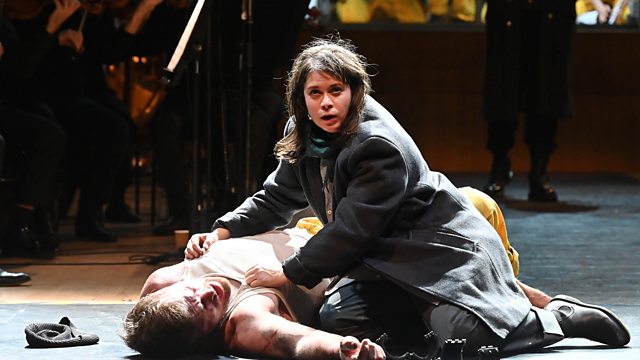 David Lang's Prisoner of the State

Live from the Barbican, the European premiere of a dark new Beethoven-inspired opera. Ilan Volkov conducts a star quartet of soloists, the BBC Singers and BBC Symphony Orchestra.

Live from the Barbican Hall, the European premiere of a dark new Beethoven-inspired rescue opera. Ilan Volkov conducts a star quartet of soloists, the BBC Singers and BBC Symphony Orchestra. 215 years after the first performance of Beethoven’s Fidelio, American composer David Lang takes a fresh view on the opera’s story. Beethoven loved the idea of freedom as portrayed in the original play by Jean-Nicolas Bouilly, but Lang discovers that in the 21st century the issues that it raises about gender and personal identity are more than a match for the ideals of the enlightenment.

Lang’s ability to glimpse the emotional heart and soul of a story within his focused, distilled and highly absorbing music has won him a Pulitzer Prize. In this opera, designed for performance with an orchestra on stage, both instrumentalists and audience bear witness to the story of a woman striving to rescue her partner from unjust imprisonment.

There are four roles. The main character is The Jailer's Assistant (soprano). She has disguised herself as a young man and come to work at the prison to search for her husband, The Prisoner (baritone). She is the assistant to The Jailer (bass), whose society is governed by The Governor (tenor). In addition to these roles there is a Male Chorus. The orchestra and chorus are present in every scene, and function both as the prisoners and as a kind of commentary on the story.

After tonight's Opera on 3, more from Beethoven Unleashed.