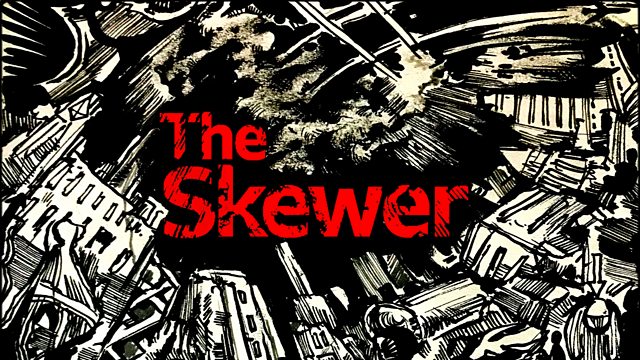 The Skewer Series 1
Episode 1 of 6

From the mind of Jon Holmes comes topical satire like you've never heard it before. A platform for brand new talent in a dizzying, dazzling satirical river of sound.

A satirical river of sound and a platform for diverse new talent, this is topical satire like you’ve never heard it before. A new open-door comedy for a fresh generation of satirists who don’t write sketches, jokes and one liners, but instead channel their talents into playing around with sound.

Creator and producer Jon Holmes curates contributions from brand new and diverse talent in a show where the experience is enhanced through headphones, attaching the listener to a late night drip of current events as they melt into the brain, evoking a feeling of drifting off, but with the occasional uncomfortable sleep-twitch.

Sketch-writing has long been the way into radio comedy but, for the new generation of satirists who don’t put pen to paper and instead beaver away on laptops using self-taught skills to toy with the news-scape, The Skewer's guerrilla approach to satire is their new playground.

“If ever there was an audio version of Coldwar Steve, it might well be this! Incredible.”

“A whole new genre of radio comedy programme invented right there. Clever, funny and scary all at the same time.”

“Pushes the boundaries of satirical radio into the murky depths. The world needs exactly this kind of creative commentary right now. Looking forward to more.”

“With this new show, Jon Holmes asserts his place as king of outsider radio art. Its woozy, punch drunk style operates as a perfect satire of our times. Headphones on and fall down it’s K-hole, friends. Exceptional stuff.” Rufus Hound

See all episodes from The Skewer