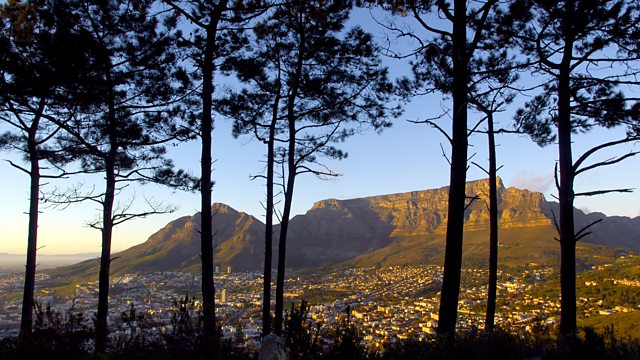 Arriving in a new place we all use our ears as detectors, seeking out clues to where we are. Composer Nathaniel Mann opens his ears in South Africa to hear sounds old and new.

A joyful, beautiful, pain filled sound journey through South Africa - from a politically charged soundscape of the murder of striking miners, to the music of a living legend, Madosini, a Xhosa musician.

Singer and musician Nathaniel Mann, recent recipient of a Paul Hamlyn award for composition, travels to the Cape to find an irresistible blend of artists working with sound and music - reflecting both the joys and the pain of this conflicted and deeply unequal society.

Haroon Gunn-Sallie was born in prison - his parents under arrest for their part in the armed struggle against apartheid. Believing he was destined to be ‘an activist', he has channeled his activism into art, finding a surprising home in the mainstream fine art world - including London Frieze. Marikana is one of his most powerful works - an installation marking the anniversary of a massacre of striking miners in 2012.
The audience enter a sealed black box, and experience a collage of sounds which take you from the mine shaft through a vivid soundscape of newsreel, loudhailers, demonstrations and bullets to the massacre. Moments later the sound gives way to a beautiful rendition of ‘Senzenina’ - a song asking ‘What have We Done?', reflecting the struggles South Africa has yet to overcome as a fledgling democracy.

Madonsini, a traditional Xhosa musician, is the first person to be recorded for the WOMAD Festival's Musical Elders Archive project, yet her fame remains limited within the world-music sphere, and the instruments she plays are in danger of being lost. "There is no-one playing this instrument now except for me and my friend. I want the instrument to live, not to die with me." Revered for her skills on two unique instruments, the uhadi (bow with calabash) and the umrumbhe (mouth bow), Madosini is also instrument maker, using specific wood she finds lying in the bush near her home. Nathaniel gets a lesson in playing the umrumbhe with mixed results...

Jenna Burchell was driving across the great Karoo - the desert also known as The Cradle of Mankind - when she noticed a white line running along the hillside next to the dusty road. It was a strata left behind after an ‘extinction event’, millennia ago, and so she began exploring the line - walking and gathering beautiful shattered rocks from the site. Using the Japanese technique of Kintsukuroi, repairing broken pottery with gold lacquer, she turned these ancient rocks into ‘Songsmiths’ working with recorded sound, to make the rocks sing of the land where they have existed for millennia triggered in each sculpture by the touch of a human hand. These ‘Songsmiths’ are both a visual and an aural treat - magically singing, as hands clutch stroke or just hover above the surface of each rock.

We also get the chance to listen in on a work in progress created by the artist Sikhumbuzo Makandula, who is fascinated by the sonic web bells cast over the South African landscape. His work explores the way that slave bells became church bells became school bells - in a sonically overwhelming show, asking the audience to join in with ringing a whole host of bells….

A sideways looks at an extraordinary sonic landscape.