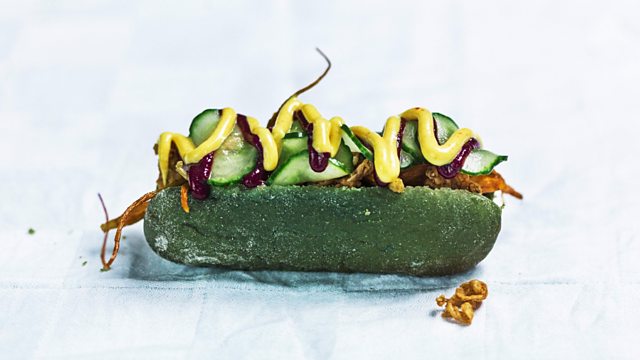 Could eating microalgae be the next big thing?

Sheila Dillon enters the murky green and bright blue world of microalgae and cynobacteria to meet the people who believe humble pond scum could be the secret to securing food for the world's growing population. She visits YeoTown Kitchen in West London where Mercedes Sieff serves up a platter of brightly coloured delights and then meets Andrew Spicer, CEO of Algenuity, who is exploring how microalgae could be an egg replacement of the future. Somehow, their conversation leads Sheila to make a green Victoria sponge. Away from the kitchen, Sheila tells the story of Saumil Shah who is growing spirulina on rooftops in Bangkok and Simon Perez who has been inventing hot dogs, crisps and salad dressings from spirulina in Copenhagen. She hears from one of the world's leading algae scientists, Professor Alison Smith, Head of Plant Sciences at the University of Cambridge, and nutritionist Rhiannon Lambert before finding out from Dr Gisela Detrell how microalgae could feed astronauts on missions to Mars.

Is The Dinner Party Dead?

Pints of progress: The brewers changing attitudes to learning disabilities