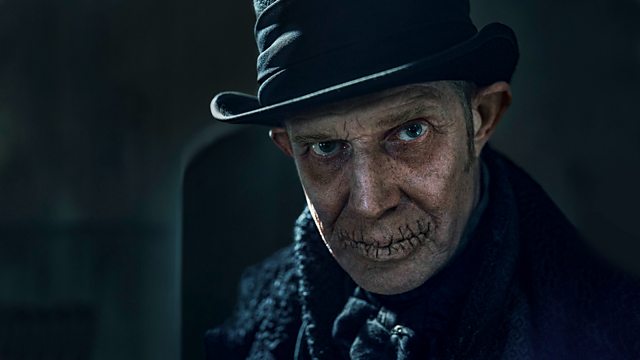 A Christmas Carol Series 1
Episode 3 of 3

Scrooge is shown the consequences of his actions by Spirits of Christmas Present & Future.

Christmas Day 1836, Mary Cratchit struggles through the streets to Scrooge’s house. Scrooge lets her in, asks that she specify the terms of their agreement. Mary is mortified: Scrooge has offered her the money in exchange for intercourse. Impatient to be done, Mary starts removing her clothes. Scrooge says it was an experiment about the price of virtue, she can take the money and go. He promises he won’t tell a soul, unless Bob ever leaves his employment. Mary summons Spirits and curses Scrooge.
Scrooge suggests that as Tim lives still, perhaps he did a good thing? The Spirit turns on Scrooge – his time is up. The next Spirit will come.
In the Graveyard of Christmas Past, Marley realises there might not be hope for Scrooge or him. He sees the next Spirit, recognises them.
In Scrooge’s house, he practises saying Merry Christmas. Behind him, a figure appears. It is Lottie. She has come back from the dead to be his second Spirit. Lottie leads Scrooge out of the house onto the streets for an experiment of her own. They arrive at the Cratchit house. Bob and Mary are making do and mending and creating their own Christmas gifts. The children rush in excited. We see their Christmas day play out – the goose on the table, the laughter – until an offhand remark by Belinda about Mary missing Christmas pudding brings Bob and Mary’s anxieties to the fore. Mary runs into the yard: she’ll tell Bob where she got the money for Tim’s operation from. She lies, says that she took diamonds from her sick and elderly aunt. Bob is delighted that she has told him the truth. Bob, buoyed, tells everyone inside that he has news – a new job. He will no longer work for Scrooge. Mary sheds a tear, tells Bob they will have to talk again after Christmas. Scrooge goes to reassure her, but Mary sees him and shouts for him to get out of her house.
Lottie takes Scrooge to Trechloddfa Chapel for their Mine Memorial Service, and he witnesses the healing in the community. Lottie shows Scrooge their memorial for the ponies that died too. Scrooge is shaken by the good of these people. He apologises to Lottie for the way he behaved towards her, that he wishes he had been able to love her. She says that her time is up – the next visitor will be the Spirit of Christmas Future.
Scrooge returns to the Chapel, now derelict. He is met by the Future Spirit. His mouth is sewn shut as he cannot speak the future. Scrooge says he is ready for whatever the Spirit will show him.
The Spirit takes him to Scrooge’s office, where Bob writes a resignation letter. Belinda bursts through the door – Tim has had an accident. As she recounts how Tim snuck out of the house to go skating and Scrooge sees the re-enacted on the ceiling of the office, as if we were suspended under ice. The ice cracks, and Tim plunges through.
In the Cratchits’ house, Tim is gravely ill. Scrooge and the Future Spirit sit in the Cratchits’ yard. Scrooge asks how things can be changed; the Spirit indicates it is in Scrooge’s power. Tim, ghostly, appears in the yard. Scrooge follows him back inside, begging Tim to live. The Future Spirit grabs Scrooge and hurls him out of the house, down to the pond, onto the ice. The ice cracks. He falls through and lands back in his bedroom at his home where he is confronted by the sight of his own dead body. Scrooge says he doesn’t care what happens to him.
Suddenly Scrooge and Future Spirit are in the churchyard, watching Scrooge’s gravestone be pissed on. We see the Cratchits arrive with picnic items and gather round a grave. Scrooge cries out - what is the purpose of showing him this? It is Marley who answers. He asks Scrooge to at least admit that they were wrong, but Scrooge refuses, he doesn’t deserve redemption. All he wants is for the life of Tim to be spared. With these words, the Spirits assemble behind Scrooge and turn away. We see Jacob settling down in his coffin for eternal rest. Scrooge sees that Tim’s grave is gone.
Scrooge runs down the high street. He slips on some gravel, a lady comforts him and apologises for not having sprinkled gravel on the spot previously. He thanks her and takes the gravel. He makes his way to the pond and pours gravel on it so Tim cannot skate on it.
As the Cratchits are having their Christmas lunch, Scrooge turns up. He explains that he knows Bob is resigning and will offer him money for thanks for his service and is shutting the company down. He explains he has put the pond out of action. Mary ushers him to the door. His money will be welcome, but it shall not buy forgiveness. Scrooge doesn’t want forgiveness. He thanks her for summoning the Spirits.
Mary looks out the window. There is still much to do.

See all episodes from A Christmas Carol