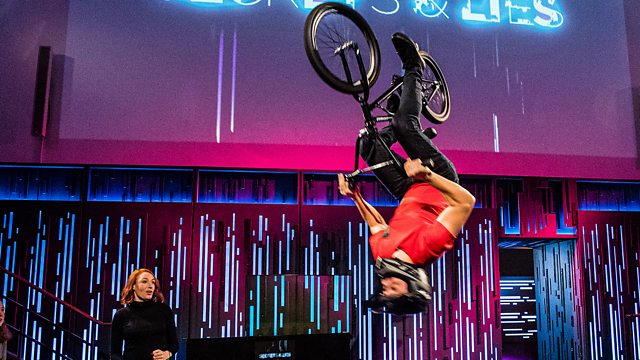 How Can We All Win?

Dr Hannah Fry tests the limits of our control, from gravity-defying stunts to human-sized drones, and delves into the world of fake news to separate the truth from the lies.

Dr Hannah Fry explores the limits of our control, from dangerous miscalculations to creating and spotting fake videos, and questions how far we should be going with our mathematical skills.

A gravity-defying BMX stunt kick-starts the debate around trusting the numbers, and launches us into an investigation of just how sure we can be about anything in our messy world. Together with maths comedian Matt Parker, Hannah uses flaming balloons and gigantic slices of melting cheese to get to the bottom of the guesswork used in real world calculations. A visiting drone zips through the corridors of the historic Royal Institution building, introducing the mother of all drones, a human-sized machine that delivers urgent parcels, and we welcome the team designing driverless helicopters and buying up London rooftops to prepare for the future.

But these physical challenges are just the beginning of the debate on handing control over to machines. Hannah explores whether human jurors or robots make fairer decisions, and welcomes Atima Lui, who is on a mission to design the most unbiased facial detection software in the world, which will say goodbye to the ‘fast track for white people’ at automatic passport gates. Hannah dives into the issues around privacy in our modern world, with Glow Up make-up star Tiffany Hunt making a member of the audience invisible to CCTV, while Hannah explores the truth behind cookies and anonymity online.

Finally, she delves into the world of fake news, to separate the truth from the lies. Leading deep fake creators team up with the Christmas Lectures to create a television first – a custom-made deep fake video of a child in the audience, highlighting our ability to use maths to warp reality however we please.

Hannah ultimately explores who the real winners are, in an escalating arms race of mathematical tricks.

How to Bend the Rules—2019: Secrets & Lies - The Hidden Power of Maths