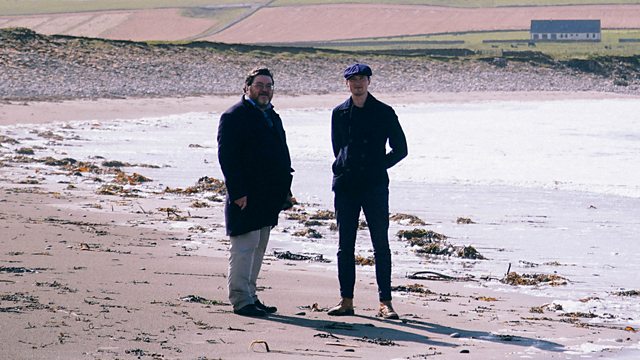 Earlier this year, the Scottish poet and writer John Burnside received a CD of Solan Goose by musician and composer Erland Cooper. These "sonic postcards" of Erland's native Orkney are inspired by local dialect, birds, landscapes and the sea. For John Burnside, it reconnected him with nature in a profound way.

The two meet for the first time on Orkney while Erland is working on the final album of his Orkney trilogy. Braving heavy rain and gale-force winds, Erland takes John to locations that inspire his work.

Scattered across the Orkney islands are some of the UK’s best preserved neolithic monuments, designated a UNESCO world heritage site. John feels a direct connection to the stone-age communities who lived here 5000 years ago, and a sense that those people lived really close to the earth, the sea and the sky. We visit the mysterious Ring of Brodgar, the neolithic village of Skara Brae, a sacred cairn, and the Bay of Skale. John responds by composing five new poems.

Sheltering from the storm, Erland and John entertain each other by swapping their favourite Orkney myths and legends - featuring seal people, a trip to faerie land and disappearing islands. These stories also weave their way into both artists' work.