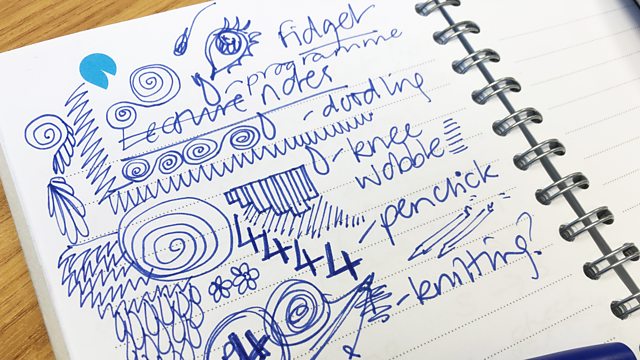 Dr Kat Arney examines why some people repeatedly click pens, doodle and knee jiggle. More than a distraction, it turns out fidgeting has potential benefits for both body and mind.

Most of us fidget. This inability to keep still might involve repeatedly bouncing a knee up and down, playing with strands of hair, foot tapping, clicking a pen or doodling.

Fidgeting is most often associated with a lack of concentration and boredom, but studies are showing that targeted fidgeting helps people focus, calms the symptoms of ADHD and may even be meditative.

Some people, like presenter Dr Kat Arney, harness their natural tendency to fidget by knitting - and she’s not alone. There is ongoing research into the therapeutic benefits of crafts. Knitted muffs, covered in buttons, bells and ribbons to encourage fidgeting, are known to soothe people with dementia and are often used in care homes.

It’s time to realise that fidgeting can be a tool for concentration for everyone - provided it’s done in the right way.

The key to understanding why we fidget may lie in deciphering the neuroscientific processes at work in the brain and body as we do (or don’t) choose to move. Dr Arney examines what drives people to fidget, the research behind it and whether fidgeting is a help or hindrance to our physical and mental wellbeing - as well as what form of fidgeting works and what doesn’t.