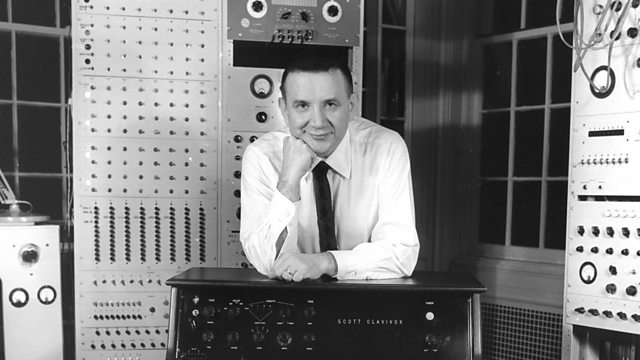 At the height of his fame as a jazz composer and band leader in the late 1930s, Raymond Scott was billed as ‘America’s Foremost Composer of Modern Music’. Jazz legend Art Blakey confessed that his music ‘scared the hell out of me’.

Electrical engineer, inventor, composer and musician, Raymond Scott became adept at creating music that demonstrated a unique commercial appeal. He wrote for Broadway and Hollywood, he appeared weekly on national radio, his ‘novelty jazz’ tunes were licensed to Warner Bros for use in their Looney Tunes cartoons. The financial success this brought enabled Scott in the 1950s to build one of the first commercial electronic music studios in America, stocked with musical devices he himself had invented, designed and built - the Clavivox, the Circle Machine, the highly complex and ambitious Electronium, to name just a few.

Scott focused on composing and recording jingles, spots and commercials for radio and TV, grabbing Americans “by the ears”, as he described it. His soundtracks for the likes of IBM provided the wider listening public with some of their first encounters with electronic music, conjuring up visions of a future that chimed with the times. General Motors commissioned him to provide the soundtrack to their ‘Futura’ pavilion at the 1964 New York World’s Fair; and the founder of Tamla Motown Records, Berry Gordy, later brought Scott out to California to help create the label's pop hits of the future.

Scott was forever experimenting, intent on pushing his instruments and the studio he had built as far as they would go. But too exacting to produce anything quickly, too secretive to share his inventions with others, Scott was eventually overtaken by the designers of keyboard-based synthesizers and mass-produced electric instruments who quickly exploited the territory he had so creatively mapped out for himself.

In 'Rewiring Raymond Scott' the writer Ken Hollings offers a personal reassessment of Scott's career and legacy. Ken talks to family members, archivists, music historians and producers, telling the story of how this brilliant eccentric, all but forgotten at the time of his death in 1994, changed the sonic landscape of the twentieth century.

With thanks to the Marr Sound Archives, UMKC.