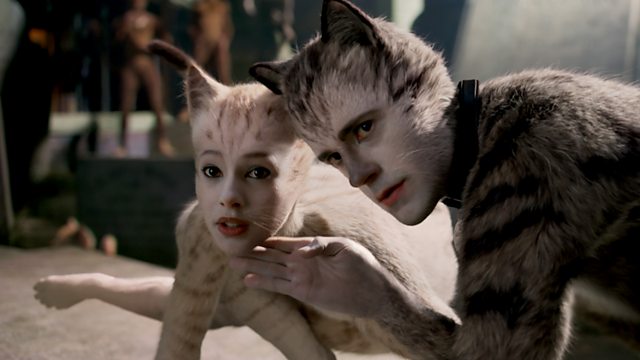 The much-anticipated film of Cats with its stellar and fur-enhanced cast including Judi Dench and Taylor Swift finally reaches the big screen. Catnip or catastrophe?

Spooky offerings in the Christmas TV schedule this year include Martin's Close by Mark Gatiss on BBC 4 and Susan Hill's Ghost Story on Channel 5. How shiver-inducing are they?

Nora Ephron's collection of essays on ageing and much else - I Feel Bad About My Neck - is being reissued with a new introduction by Dolly Alderton. It's a book that Alderton recommends giving as a present so Saturday Review suggests some other enduring literary choices that work as gifts.

And Gypsy starring Ria Jones is on at the Royal Exchange, Manchester in a new production directed by Jo Davies. Do its songs keep our critics smiling in an age of different sexual politics?

The books recommended as gifts are:
The Book of Jewish Food by Claudia Roden
Karoo by Steve Tesich
The Prince of West End Avenue by Alan Isler
Breakfast at Tiffany's by Truman Capote
Love Lessons by Joan Wyndham
The Haunting of Hill House and We Have Always Lived in the Castle by Shirley Jackson
This is Pleasure by Mary Gaitskill
Haunts of the Black Masseur by Charles Sprawson
The Compleet Molesworth by Geoffrey Willans and Ronald Searle

Melissa Lowe as June in Gypsy
(c) Johan Persson
Gypsy is on at the Royal Exchange Manchester until February 1st.

I feel bad about my neck.

Nora Ephron
(C) Ilona Lieberman
The reissue of I Feel Bad About My Neck is out on the 9th of January.

Martin’s Close in on BBC4 on Christmas Eve at 10pm.