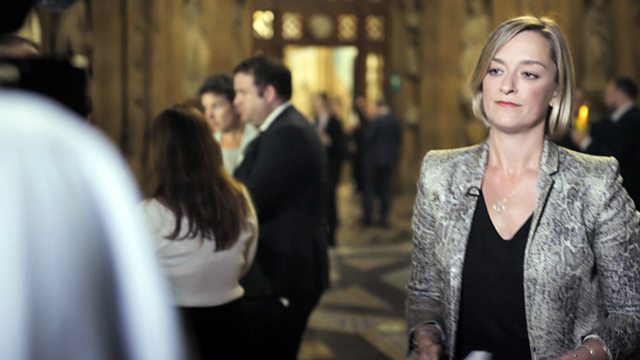 Laura Kuenssberg goes behind the scenes and beyond the headlines once again as cameras follow her reporting on one of the fiercest political battles of this generation - Brexit.

Laura Kuenssberg goes behind the scenes and beyond the headlines once again as cameras follow her reporting on one of the fiercest political battles of this generation - Brexit.

Boris Johnson came to power promising to deliver Brexit 'do or die' by 31 October. He didn't achieve it and instead, the public were asked to vote in a general election that would decide if Brexit is delivered or if a second referendum should take place.

This film gains unique access to the prime minister, his cabinet and leading politicians who oppose him for a film that records up close the decisions and drama that unfolds as the deadline to Brexit day looms.

The story begins as Boris Johnson is elected leader of the Conservative party and with it becomes prime minister of the United Kingdom. The film follows his efforts over the summer to secure a deal with the European Union, who had previously refused to reopen the withdrawal agreement. Along the way, dramatic twists and turns in the story look set to block Boris Johnson's path for delivering on his promise to 'get Brexit done'.

A Supreme Court ruling decided that his decision to prorogue parliament was unlawful. A cross-party group of MPs work together to form a 'remain alliance' and pass legislation that requires Boris Johnson to ask for a Brexit extension, and the Labour party ultimately decides to vote to allow a general election to take place.

Throughout these events, MPs from all sides of the argument reveal their candid thoughts on the strategies they are pursuing and the pressures they face from an increasingly frustrated and divided electorate.

As the story unfolds, Laura gives her unique insight into what is really going on behind closed doors, and explains how the political decisions will mean lasting implications for the future of the political parties and the lives of those they represent.