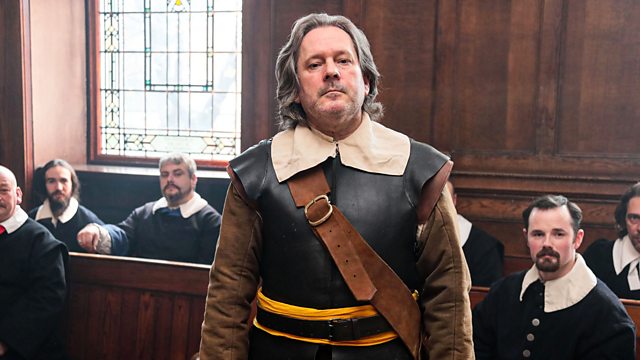 Charles I: Killing a King Series 1
Episode 1 of 3

Christmas, 1648. King Charles I is under house arrest following his defeat in the Civil War. Oliver Cromwell is plotting in Parliament. Can they bring their king to trial for treason?

The Puritan government has banned all celebrations and King Charles I is imprisoned in Windsor Castle. During Christmastide, the monarch would ordinarily feast and celebrate but instead he spends Christmas Day alone, in anticipation of what his future holds as king of England.

Parliament has been purged of all moderate MPs who are willing to compromise with the king. What is left is a contingent of MPs who are ready to remove Charles from power by whatever means possible. They are supported by the New Model Army, a powerful, professional fighting force, led by the religious zealot, powerful orator and talented solider, Oliver Cromwell. They spend Christmas Day urgently debating what to do with their king.

On Christmas night, there is a final attempt to reason with Charles when the Earl of Denbigh visits him at Windsor with terms. The king is convinced of his divine right to rule and refuses to see him. Three days later, new legislation is drawn up to put the Charles on trial for treason. Oliver Cromwell too stands by divine providence but believes his victory in the English Civil War is evidence that God is on his side and that the king must be brought to justice for the bloodshed he has wrought on the country.

The next day, their belief in bringing Charles to trial is cemented when a prophetess, Elizabeth Poole, stands before the Commons, claiming that the army will heal the wounds of the country, which is sick and ravaged by war. But there is still deliberation in Parliament, for this is dangerous ground. If the king is redeemed after the trial, those who sought to persecute him will be hunted down as traitors.

The instability of Charles’s position is not news to the people. On New Year’s Eve, a play is secretly held at Salisbury Court, where comically a king is crowned and then uncrowned. This might be comedy, but the undercurrent is deeply engrained with the truth. On New Year’s Day, the Commons overcome the first hurdle and pass an act to try the king. However, it is rejected by the Lords. Three days later, in an extraordinary, bold move, the Commons claim sovereignty over the country, ahead of the king and the Lords. On the 6 January 1649, the act to try the king is passed. Charles I will face trial as a tyrant, murderer and public enemy.

See all episodes from Charles I: Killing a King