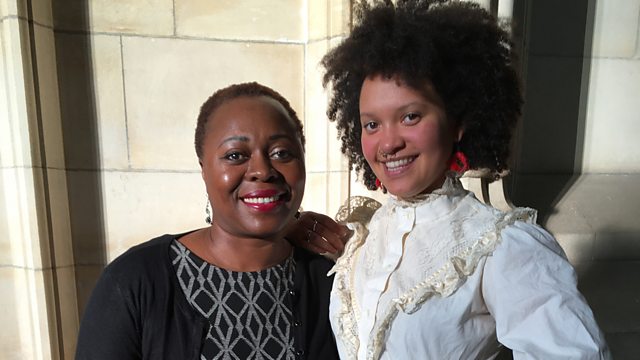 Bristol and the transatlantic slave trade

Jasmine Ketibuah-Foley examines how the transatlantic slave trade has shaped Bristol and meets some of the people who are redressing how the city's story is told.

Jasmine Ketibuah-Foley examines how the transatlantic slave trade has shaped Bristol and meets some of the historians, artists and cultural figures who are redressing how the legacy of slavery is presented and how the city's story is told.

Jasmine speaks to Olivette Otele, the newly appointed Professor of the History of Slavery at the University of Bristol about why the University has decided to examine its past and what this might mean for the city's wider approach to its colonial history.

Jasmine meets Stacey Olika, Donnell Asare and Ade Sowemimo who are working on a project at Bristol Museum to tell the story behind how some of the objects on display which they hope will present a clearer and more honest narrative about the cultural significance of the objects and the legacy of Britain's colonial past.

Historian Madge Dresser has been talking about Bristol's relationship with the slave trade for some time and she tells Jasmine that after one of her talks in the late 1990's someone defaced the city's statue of Edward Colston.

Lynn Mareno talks about how when she was growing-up in Bristol in the 1960s she was regularly subjected to racism, and how Bristol needs to deal with its past in order to move forwards..

Edson Burton is an writer, performer and historian and he tells Jasmine that whilst this work has been going on for years there have been significant steps forward in recent years, but he cautions against presenting these issue as the opinion of one united voice.

Jasmine ends the programme in Henbury at the grave of Scipio Africanus, one of the few recorded enslaved people who lived in Bristol.

Painshill in Surrey - lost and found

In the Bleak Midwinter: Holst's Cotswolds