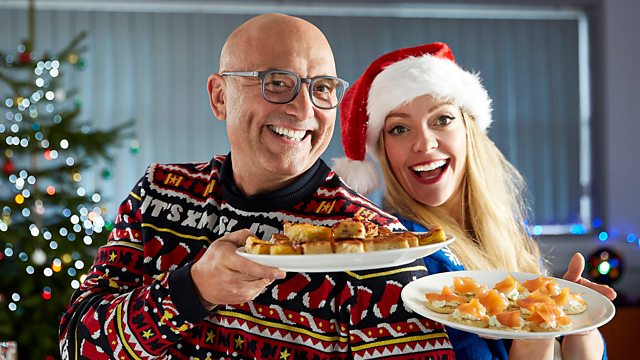 Gregg Wallace is in Nottingham at an enormous party food factory where they produce 200,000 canapes every 24 hours.

Gregg Wallace heads to Nottingham to a factory that makes 200,000 canapes every 24 hours. He discovers the secrets of creating party food on a grand scale as he follows production of mini-quiche bites and vol-au-vents. It begins with a tonne of egg - 20,000 individual eggs - which are whisked into a custardy filling. 283kg of bacon and 800kg of cheese transform this mix into quiche lorraine. This round-the-clock operation requires 600 staff in the run-up to Christmas, since 85% of their annual production is made and dispatched in December.

Meanwhile, Cherry Healey discovers failsafe scientific methods for cooking the perfect turkey. This year she is turning her oven into a turkey sauna by popping ice cubes into a baking tray. The hot steam keeps her bird succulent, and a coating of alkaline baking powder speeds up the browning reaction, ensuring a beautifully bronzed bird. She also heads to Wiltshire to a traditional candle makers. She learns the ancient technique of hand-dipping, laying down a 0.7mm thick layer of wax around a wick. It takes 16 dips to create a half-inch-wide candle.

Historian Ruth Goodman finds that, while bringing mistletoe inside at Christmas time goes right back to Pagan times, the tradition of kissing beneath it is much more recent. The earliest record she finds is a song from 1784, where it seems it began in the servants’ hall, making the most of the topsy-turvy norms of the festive period. Ruth also investigates how the period of Advent, traditionally associated with fasting, came to be connected with chocolate-packed calendars.